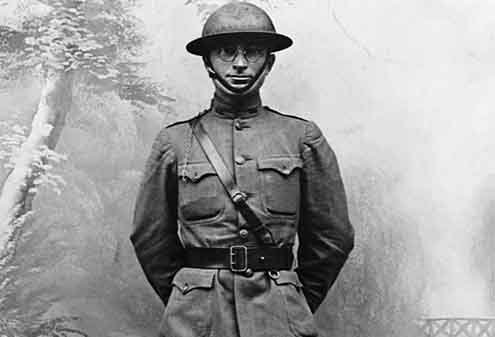 For most Americans, the war is little more than the answer to an exam question about the origins of World War II, an easier-to-understand conflict that many believe forged what broadcaster Tom Brokow dubbed the country’s “Greatest Generation,” men and woman with a strong sense of personal morality and national responsibility. Unpopular from the start, America all but forgot World War I soon after it ended in 1918. Its veterans and literary chroniclers became known as the “Lost Generation.”

Yet the PBS program kicked up lively debate. “The Great War” professed the noble goal of introducing Americans to a war described as having profound and lasting national impact. Those who knew little of the U.S. role responded enthusiastically.

But listeners more aware of the war’s history were left disappointed if not angry. Many deplored the amount of time PBS gave to the war’s run up and the social issues of the day. The time spent on African-American combat units (the Harlem Hellfighters), women’s rights and the Native American code talkers was seen as excessive, if not pandering to liberal politically correctness.

The war’s original combatants — France, Britain, Russia, Germany, and even Austria — were at odds for clearly military or diplomatic reasons. Treaty obligations had compelled the involvement of Britain, Russia, France, and Germany, which also saw a military opportunity. National defense drew in France and Belgium.

However contorted these reasons may seem a century later, they gave Europeans agreed-upon notions about the meaning of the fight. While the European view doesn’t ignore the war’s broad-reaching social aspects — the class struggle and the changing status of women — it does treat these themes as subplots. Europe focuses on the blood and guts military drama. Even today, the most popular literary expressions of the war remain combat narratives, including Erich Maria Remarque’s “All Quiet on the Western Front” and Ernst Junger’s “Storm of Steel,” both men veterans of the war.

Yet America remains confused about its motives. Disagreement over the PBS series rekindled century-old debating positions.

In 1917, America was a reluctant new superpower unsure whether to play peacekeeper or policeman. Some Americans believed helping out beleaguered England was a national duty. Others wanted nothing to do with the Old World they’d left behind.

PBS put President Woodrow Wilson, who drove America into the war, at the helm of its storyline. Wilson was a welter of contradictions. His presidential campaign slogan in 1916 was “He kept us out of the war.” Yet within months of his reelection he asked Congress to declare war on Germany. Though Wilson insisted America’s participation would “make the world safe for democracy,” he segregated the federal government, resisted women’s suffrage and enacted the 1917 Espionage Act, which stifled domestic dissent. At war’s end, Wilson’s intransigence led to America’s failure to ratify the Treaty of Versailles, ultimately undoing everything he’d hoped to achieve by becoming involved. Wilson’s personality and paradoxes were a siren call that PBS understandably found irresistible.

But Wilson was no warrior. He saw the conflict as a ticket to the postwar bargaining table. He lacked interest in the fighting itself, giving Gen. Joseph Pershing carte blanche on the battlefield and paying scant attention to progress of campaigns.

Regrettably, “The Great War” absorbed Wilson’s distaste for the real business of war. Coverage of fighting comes late in the series and is limited to cameos. The 1918 Battle of Belleau Wood, which cost thousand of America casualties, gets brief mention. So do the African American Harlem Hellfighters, the story of Army Sgt. Alvin York (whose heroism later made it to Hollywood), and the tale of Lost Battalion, the name given to inexperienced American troops isolated and mowed down by German forces toward the end of the war. Material from books such as Marine Thomas Boyd’s 1923 “Through the Wheat,” drawn from his life on the front lines, doesn’t come up.

PBS repeatedly emphasizes that the now-forgotten 1918 Battle of the Meuse-Argonne was the biggest battle U.S. troops had ever fought in. But that sprawling, often inept, and ignoble offensive (more than 25,000 died) is mostly glossed over. The World War II Normandy is far more exalted even if one day’s worth of fighting at Meuse-Argonne claimed more fatalities than all of D-Day combined.

Producers, intentionally or otherwise, illustrate Meuse-Argonne with well-known footage of British troops at the Somme. That is unforgivable. George S. Patton and Douglas MacArthur both fought at Meuse-Argonne but are mostly overlooked. Also there but unmentioned were George C. Marshall and president-to-be Harry Truman.

Does it matter? It does. The battle left a mark on all these men.

Giving priority to the war’s social issues and their impact is one thing. Doing so at the expense of battlefield details is another, especially since the war didn’t do much to revolutionize American social values. Racism and debate about whether America should play peacemaker or policeman persisted long after 1918. What changed was America’s approach to war and its costs. The dropping of atomic bombs on Hiroshima and Nagasaki as well as the postwar Marshall Plan to assist shattered Europe grew out of experiences on the Meuse-Argonne battlefield. Truman commanded an artillery battalion and at Meuse-Argonne and witnessed the carnage first hand. He wanted no repeat in an attempt to invade Japan.

America loves its Greatest Generation and the war it fought. But PBS failed to show what they owed to World War I’s Lost Generation. And that’s a lost opportunity.