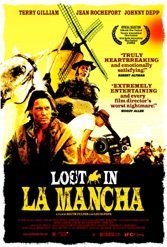 Ken Fulton and Luis Pepe’s documentary about Terry Gilliam’s Herculeanly abortive attempt to film a movie about Don Quixote (“The Man who Killed Don Quixote”) is like the history of bad news. First, the money’s tough to get (the movie is Euro-funded). Then, the lead actress is fickle. Finally, the male lead, Jean Rochefort as Don Qixote, falls ill. Meanwhile the rain in Spain falls and falls — where it never should.

Gilliam meets his travails with a lunatic’s esprit, telling himself it’ll all work out for the best. But it doesn’t. Which is when even the stalwart Johnny Depp begins to flake (ironically it was his wife-to-be, French singer-actress Vanessa Paradis, who refused to show). It’s folly-within-folly, since you have both windmills and Gilliam. Few consider the rigors involved in trying to assemble a major production. By focusing on Gilliam’s misadventure, Fulton and Pepe create a new mini-genre: movie-making gallows humor. “At least if we’re going to be fucked, let’s know we’re fucked ahead of time,” barks Gilliam. But that’s just it: He never knows. Narrated gravely by Jeff Bridges, who starred in Gilliam’s “The Fisher King.”