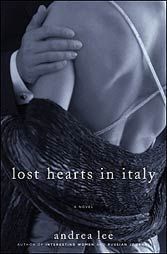 his strained chronicle of marriages and infidelity over two Italian decades is populated by juvenile caricatures and blemished by irritating gaffes.

Home computers in Rome and an industrialist on a mobile phone in 1986? Nope.

Mani Puliti, Tangentopoli, and Di Pietro as conversation pieces in 1987? Too early.

American freelancer Mira Ward meets lover Ezio Zenin in Paris, Tel Aviv, Budapest, Vienna, and Monte Carlo; fair enough, but in pre-Schengen days her pockmarked U.S. passport would have begged questions from international banker husband Nick Reivers (even if he’s “willfully blind.”) Lee’s telling of Ward’s romantic odyssey through snippets— Mira, ex-husband Nick, Rovigo-born Zenin, and outsiders all chip in — jars the narrative, and Lee’s fascination with “the bland apartheid of wealth” is an excuse to pile on details of luxury. Men remain Lee’s insoluble riddle. They’re either bossy little boys with a weakness for ass and pussy or the sensitive married kind whose eloquence is misogyny in disguise. Separated Nick rediscovers “fucking your brains out with people you don’t even need to pretend to like.” People.

Lee lives in Turin and has immense talent. If only she’d decide between airport escapism and nuanced storytelling. Beginning her affair with Zenin, self-loathing Mira tells herself: “You can handle it. This is what people do: This is what women do in books.” Depends on the book.