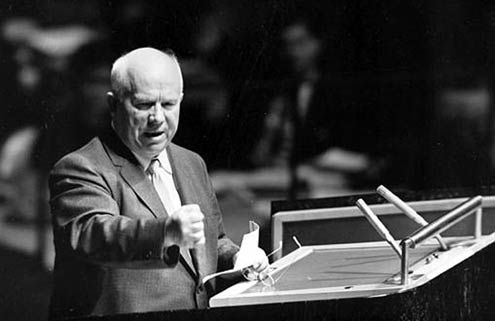 I miss onomatopoetic verbs: "Khrushchev banged his shoe on the U.N. podium."
I

’ve been in Italy a long time and am proud to speak Italian well (not necessarily a given). I speak it well enough, in fact, that when an obtuse Telecom employee who ascribed her inability to understand my (admittedly complex) problem was “because you are a foreigner,” I was able to hit back. “I may be foreign,” I said sweetly, “but I’m the only one here using the subjunctive correctly.”

Despite such hard-earned linguistic satisfactions, I’m often at a loss. There are still many English words and phrases that I have never found a way to substitute. I’m not alone. The absence of the word “privacy” was so notable it was finally imported into Italian tale quale.

Other kinds of words I miss are much more personal and reveal more about me than they do about the two languages and cultures. I could, for example, use the comfort and childhood whimsy of “skibble” from the Eloise books or “Eeyorish” from “Winnie the Pooh” (often used in Britain).

Hundreds of times a day, I grope for clumsy formations and inexpressible ideas that the use of “self” and its many variations would solve: “selfish,” “selfless,” “self-fulfilled,” “self-confident…”

“Se” and “auto” may be reflexive but they don’t convey the individuality of the stand-alone. Nothing in Italian says “All by myself” (remember Eric Carmen’s song?). There’s no Little Red Hen with her “sanctimonious self-sufficiency.”

I also miss onomatopoetic verbs: “I slammed into it.” Or “Khrushchev banged his shoe on the U.N. podium.” and “Slam, bam thank you ma’am.”

Then there’s the apparently simple word “nice.” Strange that Italy, which specializes in obscure meanings, has no word that is as significant at so many levels. Maybe because Italians don’t really do irony. A “nice” girl may not be naughty, but then again she may not be “nice.” Who says we Americans are straightforward and up front? If a guest thanked me for a “nice” dinner party, I’d worry.

Speaking of dinner parties, inebriation has no range. You’re either drunk or you’re not. Faces could be saved if Italian admitted subtle gradations — from “tipsy” to “three sheets to the wind,” “plastered” or (I love the English) “legless.” Of course no alcohol or I.D. is required; you can just as easily be punch-drunk or just “punchy.”

English does “hot and cheap,” “quick and dirty.” Italian takes a phrase or two to say the same and still can’t quite get it.

My available moods are also fewer in Italian. I’m rarely “impressed.” I can’t “sulk.” I can’t get “excited” about much. I try hard, but can’t be “endearing.” I can’t have the “blues” in Italian, but if I did, I couldn’t feel “sorry for” myself or, thank heavens, be “self-indulgent.”

I miss suffixes and the ease of creating neologisms. Until we speak another language, few of us realize how much more bang we can get for our verbal buck by adding “-ness,” “-ish” or “-able.”

I could, but never do tack “-wise” on to things. But if I did, a listener would know my choice was an ironic punch at corporate and political jargon-mongers who use it with straight faces.

Italy has no pattern.

My children assure me Italian has filler words akin to “like” and “I mean.” But what about “I mean, duh….” ?

I try to follow Italian usage and listen to my children carefully for colorful slang. But it seems that there’s less of it and what there is crops up less often than in the Anglo-Saxon world. Once, a trip back the United States brought linguistic surprises. Now, the Internet keeps me up to date. I adopt the latest as fast as anyone else.

Italy should be rich in possibilities when it comes to expressing truculence and resignation. Did the post-office or teller window close when you reached it? Did some “macho man” on the autostrada flash his lights and pass pointedly on the right, even if you were going really, really fast in the left lane?