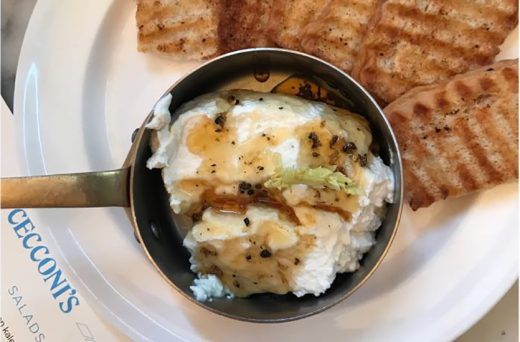 Cecconi’s is swanky and has a sensational bar, just right for L.A.'s Italian boom days.
I

t’s curious to note that Italian cuisine is, yes, among the most widespread and replicated worldwide, but also among the youngest, at least if you pause to consider how many of its staple ingredients were introduced only after the discovery of the Americas. If it weren’t for Columbus’ bad sense of direction Italians wouldn’t have tomatoes, peppers, eggplant and potatoes, not to mention coffee, chocolate and polenta.

During my time in Los Angeles late this summer, I was eager to check out the city’s exciting and still emergent dining scene. It’s safe to say that these days L.A. is among the most animated new places to eat in America. It offers a phenomenal variety of international cuisines and boasts some of the most talented chefs in the world. While Asian fusion is a powerful force, and the city’s proximity to Mexico infiltrates the local California fare, the highest density belongs to Italian spots.

That said, here’s my shortlist of recommended Italian and Italian-inspired restaurants in the City of Angels. Since it’s the U.S., you can find all the relevant information you need on websites and Apps.

Cecconi’s: This swanky, retro setting (with sensational bar and outdoor seating) is where all the beautiful people come for Venetian-style cicchetti. Don’t miss the happy hour special, or the honey-truffle whipped ricotta with crostini. Open til late on the weekend. Site.

Los Angeles is among the most animated new places to eat in America. All cuisines are booming. But Italian restaurants are leading southern California’s culinary charge.

Terra: The restaurant on the rooftop of the recently opened 67,000-square-foot Eataly megastore-food hall in Century City boasts a complex wood and charcoal burning stove at the entrance, a gorgeous terrace and sublime cocktails, many revolving around L.A.’s latest trend: gin. In addition to all the grilled meats are the ubiquitous classic pastas, some freshly rolled in-house. What most stirred me, however, was the asparagus: simply charred with lemon and sea salt. Site.

Bay Cities Italian Deli & Bakery: This classic Italian deli in Santa Monica sells freshly made pasta and baked dinners, salads, and desserts. But it’s The Godmother sandwich that everybody talks about and flocks here for. Probably the most celebrated sandwich in today’s L.A., The Godmother is a classic Italian deli sandwich filled with countless deli meats, cheese, mustard, and peppers, all contained in the house-baked roll that’s probably the best part of the panino. Site.

The Factory Kitchen: This open kitchen located in reclaimed factory space turns out hand-rolled pastas, fine pizzas and traditional Italian dishes in the heart of downtown’s Arts District. The trattoria-style restaurant is the product of a long-standing friendship between restaurateur Matteo Ferdinandi and Angelo Auriana, one of the West Coast’s most applauded and influential chefs. Site.

Officine Brera: The Auriana-Ferdinandi partnership is also behind this gorgeous repurposed industrial warehouse in an outlying area of town. The cuisine is based on prime quality ingredients and the cucina povera typical of the countryside along the Po River Valley. The place is cool and contemporary, with a menu that forgoes the classic antipasto, primo, secondo order of things. It has a brilliant wine list focused on northern Italy and a fine selection of cocktails and beers. Site.

Valentino: Piero Selvaggio opened the historic Valentino restaurant in Santa Monica in 1972 and has since built what many say is the best wine list in the city, thanks to a collection of over 100,000 bottles that’s unparalleled in the United States. Order brasato, which is boneless beef short ribs that have been slowly braised in vin santo and served with creamy polenta. Site.

Chi Spacca: This place, which bills itself as “a steakhouse on steroids,” has come to represent the quintessential new Italian dining experience on the West Coast. Brought by the same owners of Mozza, the Melrose Avenue kitchen and grill serve upscale Italian meats (and more) —Chi Spacca roughly means “he who smashes” or “chops.” The Tuscan atmosphere with worn wood tables adds to the ciccia charm. Site.

Drago: Chef Celestino Drago’s elegant menu is seasonal. It can feature roast corn agnolotti topped with ricotta and brown butter foam, or fazzoletti – sheets of pasta dressed with jumbo crab, arugula pesto, chile flakes and charred lemon. The wine list is impressive, containing both cult wines and small producers that are hard to find even in Italy. Site.

Alimento: Alimento in Silver Lake is a laid back Italian bistro with an eco-sensibility that reflects the hip district’s colorful mid-century sensibilities. Chef and owner Zach Pollack draws inspiration from Italy’s regional traditions while not adhering to any of them too strictly. Great wine list. Site.

Élephante: Gorgeous Pacific view and rooftop vibe in Santa Monica for this trendy (perhaps a bit too trendy) restaurant in Santa Monica, which attracts a see-and-be-seen crowd both at lunch and at dinner. Aside from the clientele, the food offer hits home with a terrific array of wood-fired pizzas, home-extruded pastas, and seasonal salads for just about any palate. The drinks are great too, albeit a tad pricey. Site.