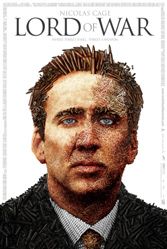 The story of gun dealer Yuri Orlov has a chip on its shoulder: it can’t choose between ethics and the sound of its own gunfire. Orlov (Nicholas Cage) is a Ukrainian-American who in the 1980s learns to make big bucks in small countries (Liberia is the centerpiece) by selling lethal weapons. Orlov’s tendentious voice-over, which burdens the movie, suggests a wannabe American Dream capitalist at war with himself (a line he speaks at the end). Between Orlov’s booming sales and twitching conscience, there’s a trophy wife (Bridget Moynahan) who spouts off mindlessly about humanity and an earnest FBI agent (Ethan Hawke) who’s close on Orlov’s tail but is always a step behind.

Director Andrew Niccol, who delivered in “Gattaca,” flunks this test because Orlov is a less a character than vehicle for 21st century amorality, a caricature intended personify both evil and remorse. Gun dealers will inherit the Earth, says Orlov, bidding farewell to the movie while ludicrously awash in gun casings. And who’s the ultimate gun dealer? Clue. He’s doesn’t live in Monrovia. Heavy-handed stuff.