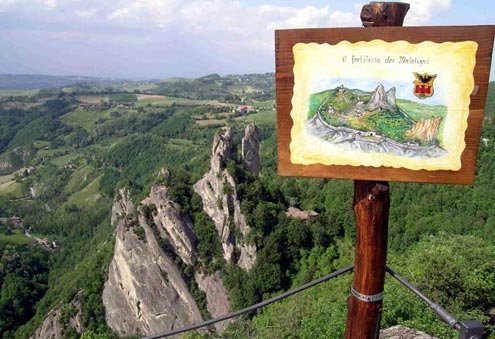 assive grey rock juts out of the mountainside like a strange, primordial castle, its twisted spires towering over gentle hills. This could be a scene from the “Lord of the Rings.” Gandalf or Aragorn might stand watch over hobbits plowing fields and working orchards, or making charcoal in the autumn woods.

Instead, it’s October and chestnut season in Modena’s Panaro River Valley in Emilia-Romagna. It’s Frignanesi territory; a population whose origins lie in feisty Ligurian-Celtic tribes. We are in the Parco Regionale Sassi di Roccamalatina, a park whose valley and hamlets were once run from medieval abbeys. We’ll walk around the Sassi della Rocca, the great stones of the fortress-like rock that dominate the valley. It’s an easy, three-hour, 8-9 kilometer hike.

From Milan we’ve driven to Modena, then past Vignola and Guiglia to Pieve del Trebbio (466-meters). The park center is closed today, but we leave our car and walk up to the pieve, an isolated parish church dedicated to Saint John the Baptist. It’s a national monument.

“Parish,” as used now, is a misnomer. A pieve was a powerful, rich “mother house” with baptistery that administered dependent churches and territory. In early Christian times, it served the baptized community but later, under the Longobards and abbeys such as the one of Saint Colombano (542-615 AD), an Irish monk, it came to refer to the subjugated population who had to pay tithes to the dominate rulers. Saint Colombano’s abbey was in Trebbia valley in Piacenza province in Emilia.

Although the Pieve del Trebbio is popularly attributed to the Longobard Contessa Matilde di Canossa (1042-1115 AD), it was first documented earlier, in 966 AD. A baptismal font from that era remains, but the church site is much older. Except for peacocks flanking a cross high over the doors, the façade is austere. The baptistery and bell tower are both separate.

Today tinny, silvery bells chime an intricate tune, and then speed up in an urgent call. No one answers.

We walk back to the parking lot and park signs in Via dei Partigiani, then up a small hill, past an electricity tower and a few houses. After 100 meters, signposts mark trail number 3 to Borgo dei Sassi (515-meters), a hamlet near the town of Roccamalatina. Through trees we see Sassi della Rocca, the monolithic, sedimentary rock rising 300 meters from the valley floor. Wind and water have eroded its clay and sandstone into fantastical pinnacles.

At Borgo dei Sassi the park center is open. It costs €2 to climb the last 70 meters of rock. Clay “CD”s signed by Italian rock star Vasco Rossi, a local lad, are for sale. Instead, we buy a map. My husband Marino studies it outside the osteria, a small restaurant and inn, while I visit the 17th-century church. Most interesting is a much older, base relief set into the outside wall — between palm and pomegranate branches, a hand with thumb and index finger raised and three fingers closed.

From here we take trail 2 down through woods to a charcoal making site, la carbonaia. Sometimes, round blackened patches along a trail are the only remains of this ancient and almost lost practice. Here, the site is set up for teaching school groups. Charcoal-making consisted of placing wood in a conical pile and covering it with turf or clay. It was fired at the bottom of a central flue, a tricky operation for professional charcoal burners (colliers) only. The result was a lightweight fuel, important for blacksmithing and other metallurgy, and an ingredient in gunpowder and medicines.

Colliers worked day and night to tend the fires. They lived in woods, sometimes at the edge of society. Misfits and rebels hid among them. Perhaps from this, La Carboneria, a secret, Masonic-like, revolutionary sect active in the early 19th century, derived its name. In any case, folktales say witches danced on charcoal sites at night. No wonder la befana, Twelfth Night, brings coal to naughty children.

We hike down path 2 and pick up trail 3 again, keeping right along the Rio Tregenda stream and passing near the water mill, Mulino della Riva (382-meters), to a clearing with park picnic tables. We scoop up chestnuts. They are small from lack of summer rain this year. We walk the valley floor, past farmhouses, through apple orchards, in a land perfect for hobbits. We reach a paved road and San Apollonia, a group of houses and a restaurant. Dishes clatter in preparation of lunch. Sassi della Rocca (also called Rocca di Sopra) towers above. Rocca di Sotto looms over nearby farmhouses like a thick, breached castle ruin.

We walk on to an agriturismo, a farmhouse inn called La Quiete at Molino delle Vallecchie. It’s quiet today but signs advertise gnocco fritto and tigelle. Gnocco Fritto is a fried, airy batter while tigelle are small discs of dough cooked in specially formed stovetops pans. Both are served with cold cuts and cheese. Tigelle can be spread with lard, garlic and rosemary paste and topped with pepper relish and grated Parmesan — my favorite.

Alas, with tummies rumbling, we continue 100 meters up the road. We climb path 3 on the right, which merges with trail 1A and ascends to an abandoned farmhouse, through the hamlet of Ca’ Rastelli and back to Pieve del Trebbio.

Forty minutes away by car, Bologna, friends and a fine dinner await us.

To get there by car from Milan, take highway A1 to Modena south, then n.623 past Vignola and Guiglia to Pieve del Trebbio. The Centro Parco il Fontanazzo, a welcome center in Pieve di Trebbio, is open daily (closed Saturday during the off-season).