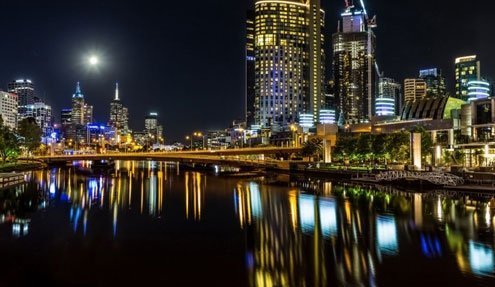 #8220;Oh haven’t you heard? Melbourne is the most livable city in the world for the third year running,” says one of my neighbors.

“Yes, someone had mentioned it,” I reply.

“So what the hell are you doing in Manciano?”

Cue my uncomfortable laughter and some cheesy line about the pleasures of seasonal foods, small town welcomes and general Tuscan awesomeness.

I walk off adding yet another notch to the mental bedpost I have of people who tell me I’d be better off in Australia. If the notches were really lovers, I’d be one hell of a Casanova.

In the meantime, my neighbor mutters something about the stupidity of foreign youth.

When I was 18, I refused to call myself Australian.

I’d spend hours arguing with my exclusively first-generation girlfriends about the various merits of our parents’ birthplace. The Napolitana was naturally mob-related and the Siciliana endured endless taunts about how she wasn’t really Italian.

Half-Calabrese, half-Veneta, I took more pride in my southern roots, while completely ignoring the racism my own grandmother had for my Calabrese mother, or “mandarin,” as nonna fondly continued called her after more than 40 years in Australia. The town my mother was born in wasn’t famous for citrus. In fact, this particular racist slur was always better suited to the Sicilians than the Calabrese, though to my grandmother all Southerners were alike.

My mother’s town was almost entirely abandoned in the 1900s after a devastating earthquake. Only my relatives, bless ’em, were too stupid to move and spent the next century shaking their fists at the far more prosperous town their neighbors built on the other side of the valley.

My father’s town didn’t get running water until the 1960s.

And here I was, the embodiment of a spoilt Western youth, taking offence whenever anyone dared suggest I was Australian. Excuse me, I’m Italo-Australian, emphasis on the Italo, despite my extremely Anglo-Saxon surname, Scarton.

My girlfriends and I plotted our escape. As soon as we were old enough, we’d leave this dull, uncultured Australia and its snag-loving residents and move to the Old Country.

And that’s how I got into this mess (aka my super fantastic, utterly enviable Tuscan life).

Before I could come to my senses, I’d shipped off to Manciano, fallen in love with a Tuscan and become secretly chuffed with the idea that my children would have roots in all of Italy; north, south and central. Take that Lega Nord!

A couple of weeks ago, some Italo-Australian friends came to visit. One of them said he’d love to live in Italy because he could drive as fast as he wanted and always rock up late to work.

“They live such laid back lives. It’s so refreshing,” he said.

“You only say that because you don’t live here. If you did, you wouldn’t find things so refreshing when you had to post a letter, pay a bill, apply for a license, run a business or really do anything,” I snapped.

He looked shocked. I had killed the conversation. He was only joking.

In a 180-degree turn that only maturity can bring, I’m now the most proud-as-punch Australian to ever step off at Fiumicino Airport. If that makes me a turncoat, so be it. My grandfather fought 15 minutes of World War II before he threw his gun into a lake and nicked off. So it runs in the family and I’m a realist. Italy has serious economic problems. Australia is in the midst of a ridiculous economic boom.

It feels like second-hand dèjà vu. My grandparents and parents immigrated in the post-war depression when Australia was the place to be.

Now I’m sitting in Tuscany as history repeats itself and every second Italian wants to head Down Under.

I had a carabinieri come and ask me how much rent was in Canberra. Sure, I’m from Melbourne, but I appreciated that he consulted the only Australian in the village about his impending immigration plans.

And yet, most Australians I know still chew me out with envy every time I tell them I live in Tuscany. If we could organize a countrywide “Wife Swap”-style reality show between Australia and Italy, methinks, the Italians wouldn’t return home.

For years, I worried the locals would see me as gold digging immigrant who married an Italian for his citizenship. Sue me, but it’s the public consensus.

Any chance I got, I’d slip in a comment about how prosperous Australia was just so they’d understand I didn’t make the sea change because I was desperate.

I didn’t realize that all I was doing was convincing them that I was a moron. The Italian Embassy in Melbourne couldn’t believe I was moving to Italy. They kept trying to give me immigration forms for my husband to come to Australia.

Don’t get me wrong, it’s a fantastic time to be an English teacher in Italy, simply because half the country is trying to learn so they can get out of here ASAP. But sometimes, I feel like my relatives in Calabria. Too stupid to realize it’s time to move to greener pastures.

And I’m okay with that for the moment. I’m okay with laughing off the increasingly serious suggestions to move back home. But I’m at that age when I see other people’s bundles of joy and just want to kidnap them. And I’m not sure if I’m okay with my kids going down with the ship too.