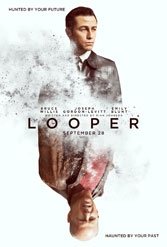 Unless you’re a confident visionary or a master of red herrings, time travel stories are high maintenance. Writer-director Rian Johnson is neither, which isn’t to say his sci-fi thriller doesn’t have its moments. Credit him with a clever premise — assassins in the present acting on orders from bosses of the future — and a willingness to let a number of riddles unfold slowly.

John (Joseph Gorden-Leavitt) is a so-called “Looper,” the nickname for hedonistic young gunmen hired to murder and dispose of syndicate rivals or enemies sent backward to be erased from the coming timeline. To them, killing the past means expunging the future. John’s 2074 urban landscape is predictably chock with designer drugs (eye drops), glam strippers, extrasensory citizens, and skid row boulevards teeming with retro weaponry (Loopers use the blunderbuss) and old school rewards (silver bars). Young John wants out, to France no less, but most assassins don’t get that luxury, their future selves often returned for rub-out, a criminally clever twist on “what goes round, comes round,” which mobsters call “closing the loop.”

John’s future self, his “loop,” is none other than 20th-century action hero Bruce Willis. The “older” John is hell-bent avenging his wife’s murder by a mystery man known only as the Rainmaker. Suddenly, present and future John must coexist in the same time zone, outlaws and rivals vying to control the shape of things to come.

Though there are twists, turns, and a visually startling kicker (with Johnson ramping things up by inserting an Exorcist-like child who may or may not be a criminal in the making), Hollywood’s need for flashbacks and intermittent gunplay ultimately shortchange the haunting premise. Gorden-Leavitt and Willis often have less to offer than their sinister enemies, headed by Jeff Daniels as middleman Abe.