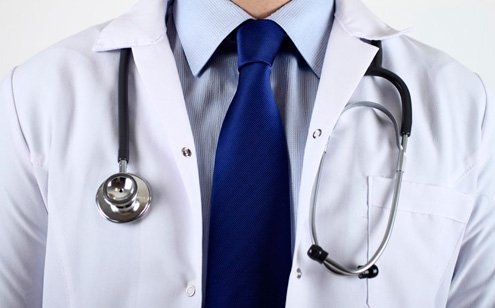 A compilation of studies suggests most patients still opt for the formal look, white coat included.
I

’ve always been conscious of my appearance. Not necessarily in line with current trends, but certainly conscious. In middle school, my favorite t-shirt sported a picture of the cast of “Star Trek: The Next Generation.” This didn’t make me any friends, though I held my ground. As a young adult, in a delayed rebellion, I wore clunky black shoes with silver studs, got my nose pierced, and listened to grunge rock. Discovering an old hat at an antique store got me started on vintage clothes in my mid-20s; I thought nothing of wearing a 1970s mint green hostess dress (complete with mother of pearl buckle) to my family’s Thanksgiving dinner. Now in my 30s, and imminently headed for a new career, the question becomes: when I become a doctor, what should I wear?

The truth is, most doctors don’t have much choice when it comes to wardrobe. Hospitals and group practices often mandate a dress code. Frequently it’s dress pants and a button-down shirt for men (sometimes a tie too); dress pants or a skirt and a blouse for women. Some codes require a white coat.

Still, there’s considerable debate about just what doctors should be wearing. The debate hinges on a basic question: what do patients prefer? It’s not a silly question. Some evidence suggests that what doctors wear affects patients’ respect and trust. If you’re a doctor asking about delicate topics such as sexual history, spousal abuse, or alcoholism, that extra bit of trust might make the difference between an honest answer and a false one.

So what do patients want their doctors to wear? Formal attire? Formal attire with a white coat? Scrubs? According to a recent compilation of results from 30 separate studies on the subject conducted by the University of Michigan, the answer varies. The review attempted to determine how medical attire affected patient “trust, satisfaction and confidence.” Of the 30 studies, 21 (70 percent) reported that patients had a preference about what physicians wore and that specific attire affected physician perception. Formal clothing or white coats — labeled “conservative and professional” attire — topped the preferred list. But age, geography, and care setting also came into play. Patients over age 40 liked formal clothes, while younger patients were fine with scrubs — sometimes even preferred them. Younger people were also more accepting of preferences such as facial piercings or tattoos. In three studies involving procedural settings, patients also put scrubs ahead of more formal attire. In the Far East, patients tended to prefer traditional clothing. In other words, there isn’t one universal dress code that patients want.

The real question, though, is whether the apparel matters. I don’t think there’s one convincing answer. Interesting to me though, is that the review showed that patients who received care before being surveyed about their preferences — those who actually saw a doctor —were much less likely to care about doctors’ clothing choices than those who were surveyed outside the context of a clinical encounter. This could very well be an anomaly that means nothing. It could also suggest that patients care more about physician demeanor, attitude and insight (which they would have just experienced during that clinical encounter) than they do about the doctor’s clothes. “Even the best-dressed physicians are likely to fare poorly in the eyes of their patients if medical expertise is perceived absent,” the study’s authors wrote.

In the absence of any conclusive evidence, I’m left to ponder my own preferences as a patient. It doesn’t matter to me whether my doctor wears a white coat. I really don’t care. If I’m in a procedural setting like the hospital or the emergency room, it’s fine if my doctor wears scrubs. White coat again is optional. What truly matters to me when it comes to appearance is that my doctor has good hygiene – he or she is simply presentable and clean. And what matters above all is how my doctor treats me. I want respect. I don’t want to be talked down to. I want to be fully informed about my health and any treatment options. When I ask a question, I want a reply that I understand but that isn’t condescending. I want to be treated as a person, not a condition. Understanding those preferences is far more important than any debate over ties, scrubs, or white coats.

Don’t get me wrong. When I become a doctor, I’ll still be mindful of my appearance, as I’ve always been. I’ll wear those dress pants, blouse, and nice shoes. I believe in looking professional in a clinical setting. But I’ll don those clothes in the belief that what makes me a trustworthy doctor is not what I’m wearing, but how I’m interacting with my patients. “It is important to remember,” read a line in the study, “that sartorial style is but skin-deep and not a surrogate for medical knowledge or competence.”