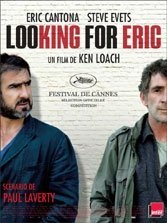 Director Ken Loach is renowned for using mainly unknown actors or non-actors with backgrounds similar to the characters they play to produce gritty, realist movies. In Looking for Eric, he has French soccer legend Eric Cantona play himself, or an apparition of himself, helping a middle-aged mailman (Eric, played by Eric Evets) through a debilitating midlife crisis.

As Eric comes to grip with his decision to abandon his wife years earlier and deal with the thugs his teenage son has gotten in too deep with, his hero Cantona offers him cryptic aphorisms and inspirational talks peppered with insight from his days playing for Manchester. The result is funny and charming.

Loach’s deeply humane sensibility and understanding of human fragility keep the comedy from slipping into clichés about male bonding. In the end, though, male bonding is what the movie is about: grown men helping a lost friend to grow up, too.