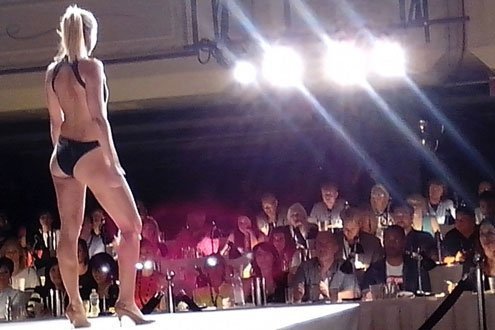 Contestants pay a purported $6,000 to attend the event and go through a grueling series of catwalks.
T

he man I’ll call Marco looks like a walking ad for the fashion industry. He’s young, flashes a blinding white smile, wears designer clothes, and sports trendy sunglasses below a perfectly trimmed buzz cut. Soft-spoken, sophisticated Marco travels the world looking for potential models, weeding through countless candidates to find those who might have the potential to make it big in the tough European modeling industry.

Discretion is vital, which is why he politely asks me not to give his name. Work often finds him in Australia and New Zealand, a goldmine where other scouts have found diamond-in-the-rough models at malls, surfing contests or just walking city streets.

His own focus, he tells me, are male models, and he’s learned to be on the lookout for “types.” The British type, he explains, is “emaciated, pale, and lanky,” which large European fashion outlets crave for major runway shows — at least these days.

Marco is in Manhattan for the weeklong International Model and Talent Association (IMTA) event at the New York Hilton Midtown. The convention places aspiring models and performers of all ages and backgrounds before the watchful eye of judges from global talent and modeling agencies who attend a variety of runaway events in search of faces, bodies and smiles that catch their eye. “We give each [candidate] a vote on a 1-to-12 scale based on how we view their modeling skills,” says Marco. A fortunate few will land callbacks that could lead to a job offer. For that opportunity alone, thousands fly to New York City at their own expense and pay a purported $6,000 admission fee (the IMTA website cites “packages” but not specific costs).

As a journalist, I attend a Tuesday afternoon catwalk and the gala that follows. Security is tight and credentials pored over. Few gain access to the Hilton’s dark and carpeted ballroom. The absence of natural light — there are no windows — and the continuous flow of contestants make time stand still.

Contestants nervously line up beside the runway awaiting their number. Behind two rows of cordoned off VIP seats are endless bleachers packed with cheering parents, friends and contestants waiting their turn to edge forward.

Jurors sit facing the runway jotting down notes in an arrangement similar to “America’s Top Model” and reality shows like it, a set-up the contestants probably know all too well.

On the runway I see children that seem no older than five. Most preen and practice flashing perfect smiles before stepping out. There are also pre-teens with braces, pimpled kids, self-conscious adults, teenagers on the brink of tears, and young women so fiercely competitive they seem ready to tackle the next contestant rather than surrender the spotlight.

The dress code is a mix of glittery pumps, sneakers, un-matching bikinis, heels, and designer swimsuits. I see someone in flashy platforms with peeling band-aids sticking out. Some contestants are overweight; others have merciless cellulite; more than a few are beautiful; all look hopeful. According to the IMTA website, most have prepped at a training center in or near their hometowns ahead of New York’s potentially life-changing rigors.

I meet an enthusiastic mother from Ocean City, New Jersey who’s here with her 13-year-old daughter Gabriella. Gabriella, says her mother, has already won her local Miss Teen Princess and Miss Sunshine pageants and is part of a group of 16 girls from the same modeling school. Kids in attendance, she tells me, can also attend seminars and workshops (parents must pay an additional fee to sit in). “Is it an investment? Yes it is,” says Gabriella’s stay-at-home mother. “But it’s worth it.”

Jenevieve and Haley are beautiful, lanky 15-year-old blondes from Houston, Texas here with Haley’s parents. “I sold home baked cookies to raise the money to attend,” says Jenevieve. “I made $4,000 that way.”

Natalie Winslear, from Philadelphia, is on her second IMTA event. She strides around in high heels and a bikini while handing out headshots to scouts. “It’s just marketing,” she shrugs. The cheerful Miller family from Detroit is here with sons Chris, 18, and Collin 12. High-energy Collin draws a lot of attention with his full head of curls. I chat with a grandmother, mother, and daughter from New Hampshire. “Everybody said that Bryn should be a model from the time she was little and I just didn’t want to waste this opportunity,” says her mother Nicole.

I hear this story time and again. The entire ballroom is packed with young and not-so-young women (and men) who, never mind where they’re from, were once told that they had that special something; that they had a chance; that they were special, striking or beautiful.

The gala’s opening act is a band made up of working models, dressed ruggedly but fashionably. They lip sync lyrics and play air instruments to famous tunes. A choir of skinny models in black swimsuits and heels backs them up, repeating the same dance move. They looked more stunned than happy. Three absurdly cute children — not one older than three — complete the cast. Next up is an inspirational video. Viewers learn that Eva Longoria (1998), Katie Holmes (1995), Elijah Wood (1989, and eight at the time), Josh Duhamel (1997), Ashton Kutcher (1997), Ashley Greene (2004), among others, got their start at the event, a key selling point — “For those who continue to wonder if IMTA … is a rip-off or a scam, we can only encourage them to look at the success stories,” notes the website. On screen, a tag line flashes: “IMTA is where dreams begin.”

Then the lights dim, with a line of contestants huddled behind the stage. Another runway event is about to start.