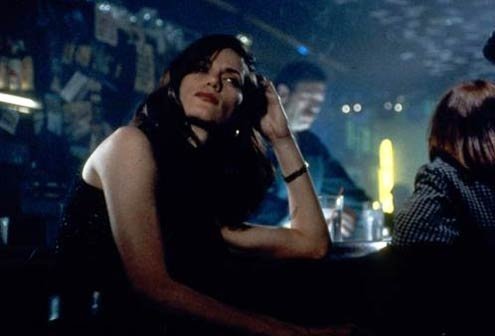 Linda Fiorentino is shameless and brilliant in "The Last Seduction."
R

omance is an Impressionist language that laps up ardor and hopelessness. New Zealander Vincent Ward, unencumbered by skepticism, lets his grand fable speak this tongue. Even the near-corny title, “Map of the Human Heart” (1993), is fair enough for an improbable story of a sickly Inuit boy named Avik who falls in love with a French girl and pursues her over decades.

The film opens in the modern Artic, where an old man studies a mapmaker at work (John Cusack, in a cameo). The mapmaker is startled by the old man’s insight. He is Avik, who then tells his story the story of his life, which begins with another mapmaker, Russell (Patrick Bergin), in another time. Boy Avik, who understands no English, has tuberculosis, and Russell helps him to treatment in Montreal. In the hospital, Avik meets Albertine. They become child lovers at the delicate intersection between longing and innocence, where dreamy pledges are devoted truths.

Avik grows into a handsome man (Jason Scott Lee) and Albertine into a lovely woman (Annie Parillaud). When World War II breaks out, Avik joins the RAF as an aerial photographer and rediscovers Albertine, who is now partnered with Russell, closing the film’s first circle. But child-love knows no restraint, nor should it. Avik and Albertine, unable to resist each other, get together again. This time they make love atop a barrage balloon (an inspired bit of beautiful madness) and in Royal Albert Hall. Ward pulls this off sincerely and unabashedly because he’s operating knowingly outside the bounds of verisimilitude. He wants you to believe a totality of feelings, not in gravity or physics. The result is an exceptional fantasy romance and a vulnerably charming film. Note to the sour and the dour: Stay away. This movie doesn’t want you.

More appropriate to the sour and the dour is “The Last Seduction” (1994), which sees Linda Fiorentino at her ferocious, amoral best in John Dahl’s drop-dead sexy thriller about a hustler who swings between business and carnal cons. Bridget Gregory (Fiorentino), an insurance executive, pushes meek husband Clay (Bill Pullman), a doctor, into a $700,000 drug deal. She then grabs the cash and heads for Chicago by car. She stops in small town, finally settles on a man named Mike Swale (Peter Berg), and fucks his brains out. The vulgarity serves a purpose because nicotine-growl Bridget is fueled by it. It’s what makes her tick. When she finds out Clay’s after her, she schemes (vaginally, of course) to get Mike involved in murdering him — without bothering to mention she wants him to kill her husband.

Dahl’s plot trimmings take a back seat to Fiorentino, who pulls off a predatory performance that makes her among the most tempting one-off femme fatales ever (better than Kathleen Turner in “Body Heat.”) She’s a self-sustained, amoral unit who knows exactly what she’s doing and why. “I’m trying to figure out whether you’re a total fucking bitch or not,” says Mike. “I am a total fucking bitch,” says Bridget.

Thanks to Bridget’s single-mindedness and Dahl’s disdain for eleventh-hour ethics, this is shockingly good stuff. Equally shocking is that Fiorentino never again got the chance to showcase her villainous side. Then again, you can’t imagine her as the accommodating type.

Housewife Samantha Caine (Geena Davis) of “The Long Kiss Goodnight” (1996) would seem far more comely, at least on the face of it. She’s great in the kitchen (dicing onions at warp speed) and, come Christmas, a charming Mrs. Santa.

But beneath Samantha’s housewife core is a CIA op on an involuntary eight-year amnesiac sabbatical. As she begins to get a whiff of the past, she hires fast-talking private eye Mitch Hennesey (Samuel L. Jackson) to find out more. He does. Turns out Mrs. Santa was a lethal weapon named Charly who never cuddled kids.

These kooky bearings in place, Finnish action director Renny Harlin quickly shoves the proceedings into stunt-fest mode (with Davis doing her own). Still, the gear-shifting tidbits make the first 30 minutes an unexpected delight, and even the typically over-eager fireballs that follow don’t dampen great chemistry between Davis and Jackson.

Mitch: “Do you always curse this much?”

Davis lost her way after an exceptional turn in the “The Accidental Tourist,” or maybe Hollywood just got in her way (in line with Fiorentino). It’s a pity in either case, since the rakish Davis always had a knack for comic timing.