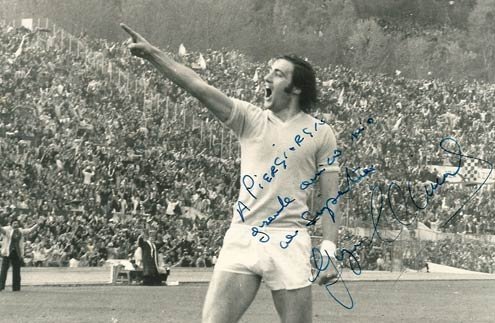 Long John Chinaglia scored 24 goals in the 1973-74 Seria A season to bring Lazio a title and make his autograph precious.
P

ino Wilson advised me to approach Long John with care. He’d had it with journalists, said Wilson. With fans, too. Unsettling words, since there I stood in the dressing room of Rome’s Olympic Stadium with Long John hunched bear-like a few feet away.

It had taken me weeks to get the audience. Longer even than it took to get an appointment with a respected lawyer or doctor, most fashionably late by rote, part of a rude coyness built into Italy’s discreet classes.

But Long John wasn’t educated. He’d moved from Italy to Wales as a child, his father a welder, and come back a decade later, his soccer skills already evident. Aside from his fame, my interview was one of convenience: He spoke some English, and my Italian was dubious. Wilson, his teammate, though the son of a British father, didn’t speak a word, or chose not to.

My first exposure to soccer in Rome came thanks to a political intellectual from a small town in Tuscany who pledged allegiance to Fiorentina but loved the game enough to go to Olympic Stadium each Sunday. I became his sidekick and guest. We were the oddest of couples: he in his 40s, erudite and immaculately dressed; I in my early 20s with hair to my shoulders.

I gradually became addicted to the city’s two teams, Roma and Lazio, both mediocre, the latter having fallen on hard times after winning its first national title in 1974.

Long John had been the darling of the Serie A title run. A burly forward built like a rugby player, he had a raging bull’s self-absorbed ego, which made him dangerous anywhere near the net. He shot ferociously, missing more than he hit, but never apologizing. He’d become a Lazio hero, a city celebrity, a big lug of a champion, the kind Rome lusts for but rarely finds, politicians getting in the way of heroes.

Lazio’s best year was orchestrated by an understated coach named Tomasso Maestrelli and given a credibility by Long John (he scored 24 goals in 1974) and gifted teammates including defenders Wilson, Pietro Ghedin, deft midfielders Mario Frustalupi, Re’ Cecconi and Giancarlo Oddi. But things soon came apart. The team played only modestly in 1975, plummeting further by the time I began watching them regularly a year later. By then Ghedin, Oddi and Frustalupi were all gone.

Long John was blamed for the recession, and the reason, fans and journalists seemed to concur, was aloofness. He’d met a woman (the bane of all distractions), and worse still she was American. He even married her: Connie, elder sister of Mike Eruzione, who’d later beat the Soviets in a famous Winter Olympics hockey game. Though she evidently liked Long John, she didn’t like the fans, nor they her. She’d bolted back to New Jersey, leaving Long John to brood.

I’d sought him out — it was April 1976 — because by then most Lazio fans assumed, correctly, that he was minutes from bolting Rome to join Connie and play for the fledgling New York Cosmos of the North American Soccer League, a team that had already recruited Pele and a host of foreign stars, most in their twilight.

I took Pino Wilson’s advice and advanced gingerly. “Scusi,” I told Long John in Italian. “I am the American journalist here to speak to you…”

This is when Giorgio Chinaglia smiled, probably sensing my awkwardness. “You can speak to me in English,” he said. “There’s too much Italian said in here and none of it says anything good.” Lazio had just lost a game, but that wasn’t his point. He was odd man out and he knew it.

What, I asked him, did he think of New York and the chance of soccer’s success in America? “New York is good. They put together a good team, many good names, maybe it will help with the success. But, you know, Americans, they like football, basketball, baseball; football is not their sport. I don’t know how it will turn out for them.”

Would he go? No answer.

Was it hard to deal with Italian fans, with all the criticism directed at him for his American marital ties? “Fans are always angry or happy about something, sometimes on the pitch, sometimes off, but Chinaglia is his own man. My wife… they treated her poorly. That’s why she goes back to America. You don’t treat a man’s wife that way.”

And what about Lazio’s poor performance? “You know, we haven’t been focused. This is a game where the guts count. Many of us are sad, and that makes an effect.”

A year before, Lazio’s Maestrelli had been diagnosed with inoperable liver cancer, replaced but not forgotten. At the time, cancer was dirty word, a male oscuro, or dark evil. Specific mention of the disease was rare in the press. Maestrelli died in December 1976.

“Rome is a hard to city to play in,” said Long John, “with always big demands and big rewards. I sometimes think, ‘Better to have a calmer life,’ but the sport does not allow it. But life is long and big.” He rose, shook my hand, wished me luck, and left. We’d spoken for 20 minutes. Two weeks later, Long John slipped out of Rome to join the Cosmos, leaving Ciampino Airport on a private jet. Larger than life, chaotic and indomitable, he’d later divorce Connie and have run-ins with the law that would taint his Italian legacy.

But the tainting ran deeper, as if to cancel out those glory years. First came Maestrelli. Then, in 1977, the 28-year-old Cecconi was shot dead under macabre circumstances. As part of prank, he walked into a Rome store with fellow player Ghedin and announced, “This is a robbery.” The storeowner, already robbed twice, pulled out a handgun and shot him. Ghedin stuck up his hands up in time.

Wilson and two other Chinaglia-era players were implicated in a 1980 bribery scandal and banned for three years, with Wilson retiring in disgrace at 35. Thirteen years later Frustalupi died in a car crash at 47. Now Chinaglia is gone at 65, of a heart attack, his long big life laid to rest.