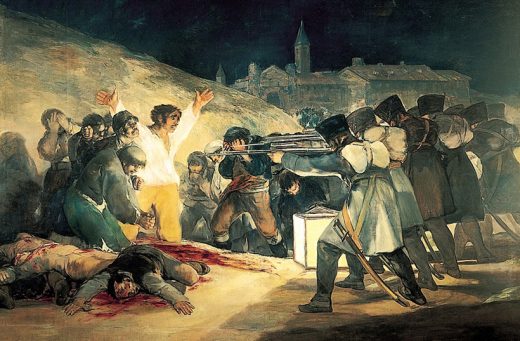 Goya's painting "The Third of May 1808" was a tribute to Spanish resistance to Napoleon's armies when they invaded in the early 19th century.
Z

aragoza (or Saragossa) was a name to conjure with, once upon a time. I first came upon it in a film, back in 1965. The theater was the Aladdin in Portland, Oregon and the movie was “The Saragossa Manuscript.” It was black and white, surreal, three hours long, in Polish with English subtitles, set in the capital of Aragon at the time of the Napoleonic Wars in Spain.

Not an obvious candidate for one of the great movies of all time, but it entranced me. I watched it three times before it left Portland forever. A little weak on history and geography, I thought Saragossa must have been an exceptionally arid and rocky place in Poland.

I’m not the only one who thought the movie was wonderful. Luis Buñuel watched it three times too. Martin Scorsese and Francis Ford Coppola rescued it in the early 1990s when there was only one print left and rereleased it in honor of the Grateful Dead’s Jerry Garcia, who also considered it one of the greatest movies ever made.

This film was adapted from the 1814 novel “The Manuscript Found at Saragossa” by Count Jan Potocki. In structure, it is a frame story. It begins with a battle scene in the walled city of Zaragoza. A French officer, dazed, takes refuge in an inn. He goes upstairs to the second floor. He finds a large dusty book on a dirty table. Setting aside his sabre, he opens the book and sits down to read.

A group of Spanish soldiers bursts in and take him prisoner. “Give me a minute,” he says, “to admire these illustrations.” The captain of the Spaniards starts looking at the book too, and discovers that it is a story about his own grandfather.

From that point on, the film follows the story they read in the book. Characters within that story tell their own stories and within those stories are still more stories. One loses track of how many layers of stories there are. Then the storytelling characters start commenting on the framing story, a narrative trick called mise en abyme.

It is wonderful, but as wonderful as it is, it has nothing to do with the actual Spanish city of Zaragoza, about 300 kilometers northeast of Madrid.

A dozen years after I saw the movie, I was browsing the stacks of the mid-Manhattan library when I randomly pulled a red-jacketed book from the shelves. It was titled “War to the Death” by Raymond Rudorff. I opened it and found the history of Zaragoza. Putting aside my sabre, I sat down to read it.

At the height of his powers, having routed the Russian army at Friedland and eliminated all his continental enemies, Napoleon decided to put his brother Joseph on the throne of Spain. His brother needed a job. Spain was right there, poverty-stricken, feeble, two centuries behind the rest of Europe. He was doing Spain a favor.

The Spanish nobility shrugged and capitulated. The common people did not. On May 2, 1808, the citizens of Madrid rose against the French. The next day, Marshal Murat began the executions depicted by Goya in his painting “The Third of May 1808.” These reprisals failed in their intended effect. There were uprisings all over Spain.

Spain was Napoleon’s Vietnam. The first time one of Napoleon’s imperial armies surrendered in the field.

This was the first guerilla war. It was Napoleon’s Vietnam. The first time one of Napoleon’s imperial armies surrendered in the field, it was at Bailén, where a corps of almost 18,000 was taken prisoner.

Without leaders worthy of the name, the people of Zaragoza held out against the French for two years amid incredible sacrifice and suffering. Twice the French breached the walls and entered the city. Under the conventions of siege warfare, the breach of the walls should have been the end of the fight. Instead, the French found themselves battling the entire population of the city, street-by-street, house-by-house, room-by-room. The defenders fought with fowling pieces, with knives, with pieces of wood, with pots and pans, with bricks, with boiling water.

At the time, the heroism of Zaragoza thrilled people all over Europe. Poets Byron, Wordsworth, and Sir Walter Scott all mentioned the city’s valor. Zaragoza, they said, was a name that would resound through the ages, never to be forgotten, a byword for courage, for honor, for the spirit of freedom.

One of the French officers wrote after the sieges: “The great character displayed in these circumstances by the inhabitants of Saragossa is one of the finest spectacles ever found in the annals of a nation since the sieges of Saguntum and Numantia,” an unintentionally ironic tribute. For in 1809, who remembered what happened at Saguntum and Numantia, ancient Iberian cities subjected to pre-Christian, Roman-era sieges, one led by Hannibal of Carthage?

Heroic struggle against impossible odds is a popular theme. It’s easier when you have young Luke (and successors) channeling the Force and blowing up a death star, but still. I want to see another Saragossa Manuscript, one about the long-forgotten fight against a real evil empire. I would totally sit through that one.