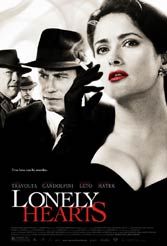 Long Island detective Elmer Robinson (John Travolta), widowed and embittered, and partner Charles Hilderbrant (James Gandolfini) begin putting pieces together and track them down. The problem here isn’t in the many-times-filmed premise — based on the actual “Lonely Hearts Killers” — but in the acting, so self-conscious of the characters seem glued to story boards. Until the climax, Robinson does little more than string together set pieces hoping for a whole. It doesn’t happen. Since the film opens with the couple’s Sing Sing execution in 1951, the narrative depends largely on the B-movie interplay between Leto’s panicky Fernandez and Hayek’s depraved Beck.

Though Hayek grows successively more distasteful she rarely reveals depth. Travolta, instructed not to smile, doesn’t. His squints are growls. Robinson dedicates the movie to Elmer, his grandfather. Would that family loyalty alone could save the day.