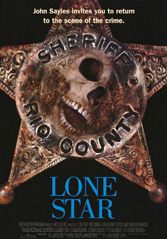 Writer-director John Sayles (“Sunshine State,” “City of Hope”) is like David Mamet in that he can’t get enough of good sentences His characters can wean you away from plot. Not so here. Bits of bone found by chance near a Mexican border town open an engaging exploration of ethnicity, identity, bigotry, and murder. The bones belong to one-time Sheriff Buddy Deeds, played in flashbacks by Matthew McConaughey. His son and current Sheriff Sam Deeds (the excellent, underrated Chris Cooper) must reckon with his father’s controversial legacy. Teacher Pilar Cruz (Elizabeth Peña) is the movie’s Mexican conscience as Sam peels the layers off Texas and his father’s murder. Sayles also gives Frances McDormand a 10-minute chance to steal the show as Sam’s alcoholic sister Bunny.