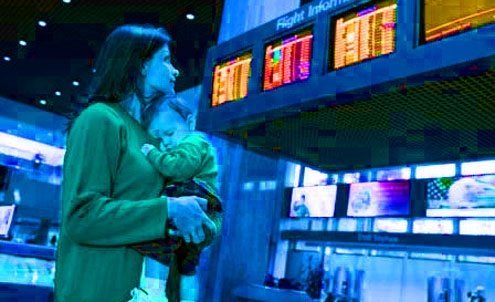 I'd like to upgrade my son to business class.
T

he holiday dust has settled. Me, my offspring and their father are back in Italy after a Christmas stay that left our hearts warm, our extremities cold, and our heads dancing with mucus (Technical note: The usual sugarplums were busy this year so we opted for voguish viral bacteria).

Now that we’re snug in our home with over 300,000 frequent flyer miles between us, I have a moment to wax about the ins and outs as well as the do’s and don’ts of traveling with toddlers, babies and the like.

Babies are pretty easy. Let ’em latch on and the sky is the limit. Literally. My five-month-old has already made two transcontinental trips during his short stay on Earth, while Oedipus visited five countries in his first year.

Two things to watch out for: vomit and airport taxes. Regarding regurgitation: Pack changes for the kid and you. You’re welcome. I learned to give this advice the hard way.

Now for the taxes. Lap children (Aged two and under) fly free. But watch out. They have to pay airport taxes, which can (and have) amount up to €180. I think this is totally bogus. After all, I am sacrificing an already miniscule amount of space… and I am being “tarriffed” on top? When I discovered this I had a few things to say that are not fit for print.

When I arrived at the airport to pay the tax I felt compelled to ask: “So what does he — my son — get for this tax?” The agent look confused.

“I mean he should at least get a free cappuccino or something.” I said lightly.

She didn’t think it was amusing. She was German.

On to toddlers. There is no easy way to say this. Traveling with the best of them is probably more painful than a big-breasted woman getting a mammogram (or so I’ve been told. Note to self: Make appointment). Once Oedipus was able to walk and talk a bit, all bets were off. Thinking about our next flight made my maternal instinct kick into overdrive. So I called the airlines.

“I’d like to upgrade my son to business class.”

“Okay,” the agent said while pulling up his account.

“Yeah, but he has enough miles for an upgrade and I was wondering…”

I figured I couldn’t upgrade and leave him in the back. But if he were upgraded, he’d receive excellent service, which would be very close to that of a baby sitter.

She didn’t hang up on me but he didn’t get upgraded either.

A mother can fantasize, right?

Once I was sure that my son would always have to travel with me, and once we had had a bad flying experience, I got serious about planning our trip’s in-flight entertainment.

For him and me. The hard stuff is frowned upon. Who knew?

But the pediatrician gave us some prescription strength chamomile and some British flower essences. I was skeptical but desperate. She said to try them for two weeks leading up to the flight. After 14 days Oedipus was as amped as usual and I wanted to OD on the stuff (which is impossible because the warning on the label says if entire container is ingested, it will have no “undesirable effect.” It also states: “Keep out of reach of children.” They should have saved the ink).

Second idea: Stay home until they are old enough to be in business class by themselves.

Mission aborted due to nostalgia for bagels and superior television programming.

If at first you don’t succeed, try the information superhighway. I Googled toddler travel and received a wealth of information.

One website told me to pack one toy for every six minutes of flight. With a 10-and-half hour flight, I imagined myself with a Santa sized sack of crap trying to get through Security. No thank you.

Another well-known pediatrician suggested “avoiding long trips.” He also stated “in terms of breastfeeding we should think years not months.” I cannot take travel advice from a man who clearly has no aesthetic regard for the female breast.

Another website sold harnesses that allegedly kept kids in their seats. Eureka! Now I was cooking with gas. I ordered immediately only to find that the product was not yet available for delivery in Europe.

Armed with some useful tips and a couple of credit cards, I set out on a journey to buy a portable DVD player, any Thomas the Tank Engine crap I could grab, and a piece of elastic.

The day of our holiday trip came, I had DVDs, a ton of trains, and a home-made contraption which I coined the “35,000-mile-high chastity belt.” This piece of elastic looped around Oedi’s belt and the 747 seatbelt. It was genius and would make my life easier. If everything else failed, I was armed and ready to use my secret weapon. Lollipops.

I latched him in, he silently played with his trains, watched his DVD player on mute and ate three Clementines and two apples. I don’t know if it was luck, karma or that belt… but our flight was without incident. It was actually easy and the lollipops never even left the wrappers. I was the only sucker on that flight. Especially since I left one apple core in my bag, which was sniffed out by a beagle from the Department of Agriculture. Be advised: heroin and fruit will not get through customs.