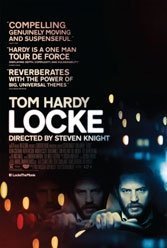 In writer-director Steven Knight’s lean, knowing, and morally graceful film, Ivan Locke (Tom Hardy) is a respected building foreman — a veteran known for running a tight ship — who the night before a major concrete pour steps into his BMW and drives away from his Birmingham job for good (intentionally or otherwise, its plates read “Adio,” one Italian consonant short of goodbye). The reason is that he’s fathered a child out of wedlock and his one-night-stand companion is giving birth. His drive to a London hospital, the film’s entire focus, is a series of car-phone calls to his wife of 15 years; his older son; the mother of the child; his stunned Irish assistant; his despised (dead) father; his enraged boss.

Knee-deep in the hysteria of others, Locke seeks to explain, rationalize, assuage and cope — the pillars of highly perishable postmodern life. His greatest concern is to do right by the birth while ensuring the proper handling of the concrete for the 55-story tower, his nonhuman legacy. “You have to be solid,” he tells himself in what becomes an infecting, even terrifying hum. Start to finish, this is Hardy’s film, and he gives Locke the calm bravura of a realist a step shy of falling off a cliff, or jumping.

His locked-in Locke is an honorable “stick-to-the-plan” manager who has decided to right a wrong, come what may, all the while trying to address rational variables and fend off irrational demons. Some things fray wrenchingly, yes, but the undoing matters less than what remains standing — since concrete (“like blood,” says Locke) is the film’s key metaphor. Knight compresses a lifetime of human complication and compassion into a small space and gives upheaval a masterful voice.