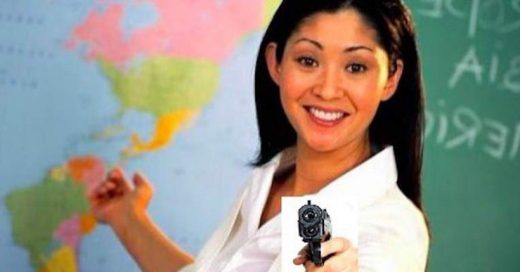 Very funny? Not in the least.
A

mong the earliest clichés pinned on “ugly American” tourism in postwar Europe was a tendency to shout. If locals didn’t understand a visitor’s English, otherwise benign tourist would repeat the request more loudly, then louder still, with volume irrationally tied to comprehension. Foreigners would eventually get the message if for no other reason than to bring an end to rude exasperation.

This grade-school approach to linguistic differences waned over the years. Italians picked up on the rudimentary English that has since evolved into leaky but serviceable EU English. But cliché is a stubborn. Now it’s Angela Merkel’s Germans who shout.

Linguistic mayhem grows less amusing when applied by extension to other subjects, such as gun control in the United States, a nation that outside its borders has been tainted if not defined by its recurring high school massacres. In this paradigm, the widely circulated idea of arming of teachers is in the shouting spirit. New restrictions on weapons are dismissed in favor of an amateur resistance force similar to the citizen-sheriffs westward-ho settlers picked to defend them (some, untrained, differed little from outlaws).

If an armed 15-year-old enters a hallway or classroom, designated teachers would be ready to brandish their own cannons to protect the sanctity of the whole. Collateral damage – students caught in crossfires – would be accepted as casualties for the greater good. If only the debate itself didn’t push those who deplore what they call “a culture of violence” deep into Faustian territory.

The arming of teachers, very much an act of shouting, would shift the focus away from limiting the availability of weapons to creating an amateur resistance force.

Force-with-force thinking isn’t remotely new to a county that over the course of its first century routed indigenous peoples using any means necessary and fought a north-south civil war over the entrenched institution of slavery. While Europe warred for millennia over kingdoms and religion, the U.S. was no less bloody in a shorter time. Parts of America still swear by guns and exalt the biblical correctness of the death penalty.

Among these believers, the idea of giving teachers sheriff responsibilities is logical in a way resented only liberals and progressives — weaklings who associate weapons with uniforms only.

Deep is the rift, since some of those same progressives believe not even police can be trusted in a state whose festering racial tension can be made to explode by those charged with maintaining the lawful order.

Arming teachers stirs yet another pot in that America has had a long flirtation with righteous militias (“Live Free or Die” goes New Hampshire’s stern motto).

The militia movement, whose latest incarnation peaked in the mid-1990s, receded only when Islamic terrorism by chance transformed anti-establishment sentiment into Freedom Fries patriotism. Rogue, anti-federal groups, many armed, were distracted by post-9/11 zeal. Why take up arms to slay Big Brother when non-Christian enemies had embraced the same goal, if for different reasons? Nationalism changed gears and militias went to war on behalf of the country whose officers they previously claimed to loathe.

But loathing’s stomach is growling again, its 21st-century acid producing an assembly line of conspiracy theories. The sitting American president, furious he’s being investigated by an FBI he believes is biased against him, wants the agency itself investigated. Confrontation is currency among both adults and adolescents, with the latter taking to guns to stand out. Institutions seem on the defense, if not unglued, a trend ironically reinforced by the moods of a militia leader-like commander-in-chief.

Arming teachers neatly suits those convinced law enforcement agencies have failed to protect school children (while wasting time on Russian frivolities). If the government won’t act, undercut by liberal interference, states and their municipalities should fight fire with fire using their own ingenuity. To such thinkers, debating how easily weapons circulate is a waste of time in a country where legal gun ownership remains a constitutional right. It’s their misuse that matters, and armed children, often irrational, are any state’s worst nightmare. But maybe, just maybe, if an armed teacher-sheriff slays a young aggressor, the next antihero-in-making will think twice — or so goes the folksong.

It’s the ne plus ultra of shouting for comprehension.

As for the tourist cliché, few ever illustrated its back-home side, when repatriated tourist showed slides and explained how much he’d loved the trip but that no one understood a word he said, even when he repeated it. So sometimes had to shout: “They sure got my meaning after that.”

Push has not yet come to shove in schools, but if and when lock turns to load, duck.