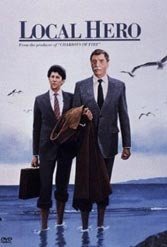 Sometimes the best way to mock corporate greed isn’t to hit it with a proselytizing sledgehammer but to charm it into submission. That’s what Glasgow-born director Bill Forsyth elected to do in this whimsical story about a young American frontman sent to Scottish town to disband it but who instead falls for its quirky cadences.

Eccentric Knox Oil and Gas boss Felix Happer (Burt Lancaster in a delightful late-career role) dispatches upstart assistant “Mac” MacIntyre (Peter Riegert) to the seafront town of Ferness where he’s expected to woo townsfolk into taking a big bucks buyout that would turn transform their odd little village into a refinery. Riegert goes unwillingly, but once there finds himself in the company of a strange brew of locals, including gossipy innkeepers, a Russian trawler captain (with his own financial portfolio), and a working mermaid (yes).

You wouldn’t know oaf the oddness ahead were it not for the wonderfully weird Happer, a star-watching buff who insists that Mac keep an eye on the Northern Lights and report back to Texas. It’s enough of a screwball insinuation to suggest that Mac is headed into an intimate parallel realm where time stands still and ancestral ties are a kind of magic potion. By the time Mac has all but sold the town on the refinery bid, he’s stalled by stubborn beachcomber Ben (who sells comets) and has fallen for a scientist with webbed toes. Happer’s arrival from Houston gives the surreal goings-on a cheering outcome.

The film’s genius is its deadpan wit, complete lack of ostentatiousness, believable magical realism, and among the best and most sympathetic film soundtracks ever written, by Mark Knopfler, then at his Dire Straits peak.

When Mac gets to beachcomber’s Ben’s shack, he notices there’s no door. “How do you do business with a man who has no door?” he asks Russian sea captain Viktor, who pricelessly replies: “The ethics are just the same.