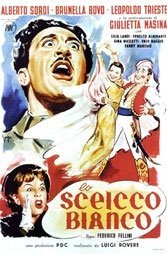 Fellini’s whirling dervish of a comedy (his solo debut) is an early take on celebrity worship and dreams undone. Young newlywed Wanda (Brunella Bovo) is ushered into bustling Rome by a smarmy, saucer-eyed husband Ivan (a Chaplain-like Leopoldo Trieste) intent on using their honeymoon to introduce her to his upscale relatives. Instead, she sneaks off to find her hero, a two-bit “actor” in an Arabian Nights picture book she’s come to associate with all that’s exotic.

Fellini has two setups: the first is whimpering Ivan left to explain Wanda’s absence to his pompous but bewildered relatives; the second is Wanda transported to the outskirts of Rome and allowed to meet her Valentino, the white sheik, an actor named Fernando Rivoli (Alberto Sordi). Their first encounter, powered by Nino Rota’s whimsical score, is a visual masterpiece: he singing on high swing between tall trees; she below, the fan-to-end-all-fans, looking up into the stuff of adolescent girl dreams. “Bon jour,” says the talking cad.

Next, scabbard-wielding, sweet-talking Fernando drafts Wanda into beach shoot that offers a typically bizarre Fellini landscape of camels, faux-divas, and third-rate hucksters. Wanda is enchanted until Fernando grows absurd, the dream spoiled. All the while the flustered and hapless Ivan busies himself covering for her. The gist of all things normal — a trip to the big city, a honeymoon, husband and wife, bourgeois behavior and goals — are tossed into a fracturing comic hopper.

More than most, Fellini understood the fascination of illusion, to the point of total enslavement, a theme that would grow increasingly less comic as the years wore on her. Even here, an apparently happy ending and Rota’s musical brassiness conceal obvious melancholy. Once starstruck, it’s hard to ever see the world in the same way.