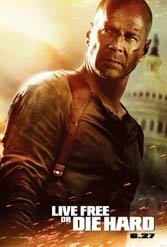 It’s truly hard to dislike Bruce Willis. Unlike most now-middle aged action heroes he’s willing to mock his aching body. Though the latest and probably final installment in the “Die Hard” franchise is little more than a Saturday Matinee video game, Willis’ bedraggled John McClean (“A Timex watch in a digital age”) provides a reliable 100 minutes of entertainment.

Director Len Wiseman’s hackneyed plot, such it is, concerns a disgruntled former government computer whiz Thomas Gabriel (Timothy Olyphant) who decides to take out his “You-can’t-fire-me” annoyance on the U.S. of A. McClean, busy chastising his hot but headstrong teen daughter (Mary Elizabeth Winstead), as always himself in the wrong place at the wrong time. Suddenly, he’s protecting a young hacker Matt Farrell (Justin Long) who’s never heard of CCR — shame on him. Havoc, violence and post-Timex digital mayhem ensue.

Missing from this testosterone absurdistan is the ironically put-upon McClain of the 80s. His postmodern self is no more than an adjunct to exploding cars and rocket launchers. The good lines are few; the comic relief sacrificed to parody. It’s too bad because Willis is better than most at mocking the super-cop archetype. Here, he gets little chance.