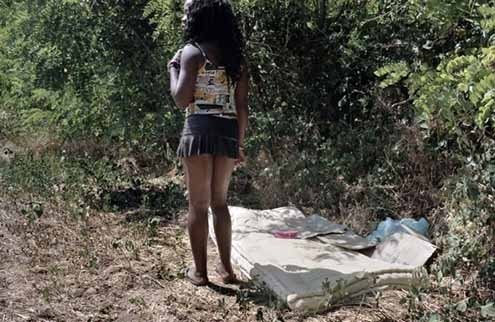 The International Organization for Migration estimated that 80 percent of the 11,000 Nigerian women who entered Sicily in 2016 would end up trafficked into the sex trade.
A

nyone who travels outside Rome’s Centro Storico is likely to see scantily-clad women lounging along roadsides, or evidence of a “love nest” – a chair, a mattress, and, on closer inspection, condoms. It gives new meaning to “all roads lead to Rome.”

The women are prostitutes, and with their male and transgender counterparts they are present in abundance.

Just as abundant are basic questions about their trade, which came up during a dinner conversation this year in Rome: “Is prostitution legal in Italy?” “Should it be?” “Is a prostitute a victim?” “Is she a public nuisance?”

The European Union categorizes prostitution as completely legal in Italy and other European states, including Spain, Portugal and the UK. But it’s street prostitution that’s legal in Italy. Brothels are not. The 1958 Merlin law (named for Lina Merlin, the first woman elected to Italy’s Senate) banned brothels (known as case di tolleranza,” houses of tolerance”) and imposed a new offense, “exploitation of prostitution,” aimed at pimps and clients.

In the United States the legality of prostitution is determined by individual states, similar to the manner in which criminal law generally operates in the EU. U.S. state law has the same features: prostitution is a crime in all but a few specific rural Nevada locales (including outside Las Vegas).

The debate today is about “abolition,” the goal of which is to eliminate prostitution; legalization with regulation (Nevada and Germany, for example); and decriminalization/legalization(New Zealand and some parts of Australia). Abolitionists see prostitutes, or sex workers, as victims, whereas the proponents of legalization see them — at least potentially — as agents of their own destiny.

In 1999 Sweden adopted a system of criminalization in a bid to end prostitution. Sweden was followed by several other Northern countries and most recently, in 2016, France. Now called the “Nordic Model,” and the “sex purchase ban,” feminists such as Gloria Steinem, as well as some church-based and rightwing groups support it. Those who reject the Nordic Model call it “Victorian” and a retreat to paternalism. Its opposite, decriminalization (the norm in Holland, Denmark and Austria), has been supported by organizations with strong women’s rights track records, including Amnesty International and Human Rights Watch.

Whatever the existing prostitution laws, enforcement has fallen to local police forces. In Italy, police use laws based on obscenity, including dressing in revealing and suggestive clothing, to move prostitutes out of an area or neighborhood. Current Italian law punishes obscene acts committed in the vicinity of places frequented by children and young people. According to a Rome prosecutor, these are parks, schools, day-care centers and athletic facilities. The result is women who ply their trade on roadsides far from any town or city center.

The enforcement trend in the U.S. has been along the lines of those European states that focus on the clients and pimps, rather than the arrest and incarceration of the prostitutes. That trend is limited, however, with the U.S. leading the world in prostitution arrests and with women much more likely to be arrested than men. As in Italy, enforcement is at the local level and often employs nuisance laws, such as loitering statutes. Use of these laws, as with the Italian obscenity law, may be viewed as a step towards decriminalization, but they also give prosecutors latitude to arrest anyone they please. A large percentage of the detained are immigrants and people of color, as well as those of lower socio-economic status, even though, at least in the U.S., more prostitutes are high-class sex workers or escorts than street-walkers.

In both Italy and the U.S. immigrant sex workers are a particularly vulnerable group. The International Organization for Migration estimated that 80 percent of the 11,000 Nigerian women who entered Sicily in 2016 would end up trafficked into the sex trade. These women — as well as undocumented women in the U.S. sex trade — face deportation if they attempt to report their circumstances.

It’s tempting to view prostitutes, whatever their gender, as small business entrepreneurs, but too often pimps exploit them and leave them vulnerable (in fact, male and transgender prostitutes are generally more exposed to violence from pimps and clients alike). If society could protect them from that exploitation, I’d vote with Amnesty International for decriminalization. But in my mind that is and remains a very big if.

— Don Carroll is on two-month leave. He returns December.