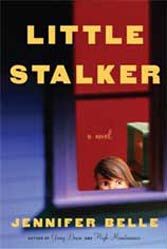 If it’s possible to imagine Paul Auster as a diminutive young Jewish woman flitting brilliantly between giggles and razor-sharp wit, Belle is that creature. And she’s a rare specimen: an insightful New York City storyteller who knows darkness but doesn’t take herself too seriously. Here, she’s done the near impossible: conjured a delicious post-9/11 confection without knee-jerk reminders of urban affliction.

Boil it down and the story goes like this: successful 30-something Manhattan writer Rebekah Kettle (her novel is called “The Hard Part”) has a huge crush on aging director Arthur Weeman (read Woody Allen) and impersonates a teenager to write him letters (signed “Thalia”) while trying to manage her own confusing life, which includes long stretches of watching “Little House on the Prarie,” working for her doctor father, baby-sitting a semi-senescent patient, dealing with a “brain” tumor, and making sense of having lost her virginity at 12 to a Disneyworld “pirate” (an abortion on that tab). Belle’s prose has Woody’s edge, Groucho’s wickedness, and Billy Wilder’s tender sense of farce.

It’s quirky, voyeuristic, and hilariously loony. Among Weeman’s movies are “The Dim Sum of All Parts” and “The Tumorist.” Rebekah coins the phrase “testicle bonnet,” probably worth a prize on its own. She manages to link “cervix” with Cervantes. A “psychic kinesthesiologist” says her “throat chakra” is blocked (inducing a new genre: “blow job slapstick”). Her adversary is a busty entertainment reporter named, get this: Ivy Vohl (read “jawohl”).

But the novel’s gift is to remind the city of its own once-treasured mix of sarcasm, fatalism and vanity. Of her recent history, Rebekah writes: “The last thing on my timeline — the World Trade Center attacks — hadn’t really happened to me, I realized, it had happened to New York, so it didn’t really count.” Belle’s wise third novel is a semi-autobiographical “I Love New York” charmer that restores The Apple’s birthright zaniness. (Note to Jennifer Belle, who loves Venice: It’s Canal Grande, not Grande Canale; a Venetian would say, “Ah, Americana” to Rebekah, not “Ah, Americano”; the novel “The Hard Part” translates as “La Parta Difficile,” not “La Sezione Solida.”)