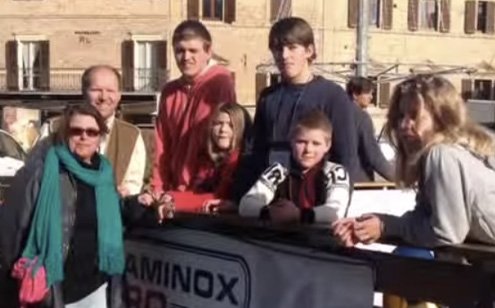 In an attempt to prove to my children that good things can happen if you get off the sofa, my family has made two films to support a crowdfunding project on Indiegogo. For those of you who don’t know, crowdfunding is a fund-raising practice that runs through the Internet. You put your proposals out there in hopes of attracting interest and backers. Indiegogo is a site that helps spread the word.

Our idea was to make a movie to help support a Montesorri summer school in our local Italian town, a program we’d actually already started but need some help — such a classroom. We’d like to use the barn, but that would mean putting our horses elsewhere. Hence the fund-raising drive.

Making the film was fraught with difficulty. Once we’d written the script, a relatively straightforward exercise — the Montessori educational message was clear — we tentatively started shooting. That’s when we realized we had a lot to learn.

Apart from simply trying to remember what it was we had to say, we faced all sorts of problems, most in the “too many chiefs and not enough Indians” vein. That’s what happens when you have a large filmmaking household.

When the “talented cast” decided a take was successful, the “director” often didn’t agree, or worse, hadn’t been paying attention because a friend had called and she had to take it. This of course was met with howls of rage, and tantrums, neither of which help the performances. Keeping the “talented cast” happy became a not only difficult but also expensive — and not just because of technical difficulties. Hanging about and following direction doesn’t come naturally to my wayward brood. I can quite see Kristen Scott Thomas’ point when she said she’d given up making films because she no longer wished to sit in a trailer doing embroidery. By the end of the first day my daughter stormed off the “set,” the script was in tatters, and we’d literally run out of power.

Viewing the rushes made it clear we had another problem: me.

Lacking experience, I turned into a blithering, simpering idiot every time the camera was on. I couldn’t stop smiling like a simpleton. I couldn’t follow the simplest of instructions. All I had to do was walk out of the barn and to the left, but as soon as I saw the camera I completely forgot what I was doing. In the end, my son kindly suggested we did the scene without me. Good idea.

I sought advice from a drama teacher friend and she reassured me that everyone thinks they look silly on film. I then showed her a clip. She took one look and muttered, “Mmm, I see what you mean.”

It took a full week before we managed to drag ourselves off the sofa for another attempt and this is what we ended up with. I don’t think we are going to the Oscars this year but we did finish something, and off it went to Indiegogo. And maybe, with luck, someone will like it, appreciate it, and decide to lend a helping hand.