Little Misunderstandings of No Importance 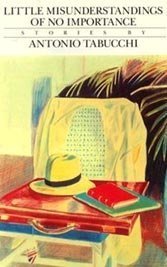 By Antonio Tabucchi, translated from the Italian by Frances Frenaye

talian author Antonio Tabucchi died in 2012, leaving behind an ample legacy of stories and novels that earned considerable respect but never unanimous acclaim. That’s in part because illusionist Tabucchi seemed always to have one foot in the surreal and the other in the earthenware of place, politics, and the metallic details of daily life. This early collection of stories (“Piccoli equivoci senza importanza”) — 11 in all — provides valuable insight into the “saudade” side of his vision, the Portuguese notion of nostalgic longing as aspect of life’s labor both gained and lost.

At his best, Tabucchi is a rueful stylist adjusting a zoom lens, in and out, in and out, a ritual that’s part Kabuki, part poker, ritual and bluff. Chance on its own terms plays tricks, making “total recall born of a long acquaintance with the detailed topography of a given room…” into a variable. Tabucchi adjusts such personal topography, pricking the “pinwheels of subterfuges” to make them serve his ends.

In the title story, the “little misunderstandings” are a running joke among five school friends until they turn less funny over time, with cancer and crime replacing youthful frivolity. In “Rooms,” the wife of a revered but ailing writer gradually understands grief as a kind of rage, a syringe in hand. In “Trains,” a man on a pilgrimage to India meets a stranger who speaks of local icons, of history, and, more cryptically, of enduring awful medical experiments — and a murder ensues. The peevish bureaucrat-turned-academic in “Bitterness and Clouds” lays vindictive waste to those who once wronged him, but the bitterness won’t go away.

There are also traps: a man who thinks he recognizes a personal ad is left with a phone number and dead air; a boy and girl joking about spells and evil acquires scary substance. “Cinema,” the final story, begins with a conspiratorial love scene in railway station but turns out to be just a botched movie take between two stars and onetime lovers now involved in a sad remake. But the actor still loves the actress and finally pleads for a twist in the script. He wants the “addition” of a heart attack. He wants to die.