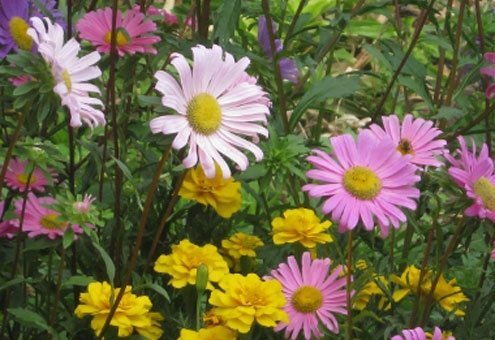 Monte Barro: The wildflowers and birds of your dreams.
M

onte Barro, a natural park in the Brianza area near the city of Lecco in Lombardy, is famous for its biodiversity. The mountain has an unsurpassed abundance of wild flowers and butterflies and is a stop-off for birds migrating from Africa to northern Europe. Schoolchildren love the archaeological site dating from the 5th century to late medieval times.

After driving 50 minutes from Milan towards Lecco on highway SS36, Monte Barro (922-meters) is the first mountain of the pre-Alps we encounter. We take the exit for the towns of Oggiono and Galbiate and follow signs for Sala al Barro and Galbiate (370-meters). We then follow park signs for 10 minutes until we pull into a parking lot in Fornace. It’s swarming with volunteers, mostly pensioners, cutting tall grass and clearing undergrowth by the wayside — spring cleaning in mid-May.

“What’s up?” my husband Marino asks. He reaches for his backpack.

“We’re working for you,” a man replies. He turns to some volunteers and speaks roughly in dialect.

“Brianzoli,” Marino says to me. “Hard workers but taciturn.”

“Something special must be up,” I say.

We head across the road to wide, cobbled trail 302, which leads to Monte Barro’s summit. At a signpost, we cross path 307, a ring route around the mountain which passes a tower ruins. Here we meet an elderly couple.

“They’ve already repaired the paths,” the woman says. Her husband goes left on route 306 to the archaeological remains (630-meters) of a military settlement where Gerberga (circa 750-774 AD), daughter of the Longobard King Desiderio, sought refuge from her brother-in-law, Charlemagne.

We continue walking straight up trail 302, past ancient walls, to the eremo (741-meters), which has been a monastery, a hotel and a sanatorium. It is now the park center and has both a natural and archaeological museums as well as a restaurant. From the restaurant roof terrace we gaze south and west at Annone, Pulsiano and Alserio lakes. They look like giant puddles separating Moraine Hills from the Pianura Brianza, the Lombardy plains that stretch to the horizon. Highway SS36 snakes around the lakes, past towns and factories until it disappears from view.

Back on the path, we take stairs up to San Vittore church, and then pass a small, restored 17th-century pavilion to the lookout over the Lecco branch of Lake Como. The towns of Malgrate, Valmadrera and Lecco sprawl below us — cement and steel located beside a calm lake below the towering and rocky Alps.

This opens to a short botanical walk designed for school tours. The plant names on the signs intrigue me: Fairy’s Linen, Little Meadow Widow.

At the end of the walk, we go up steps, still on trail 302. Nature explodes and I’m in wildflower heaven, a riot of yellow and white followed by reds, purples and blues, then yellow again. One minute we walk on dry rock, next the earth is wet and humid, then dry again. The variation between dolomite and calcareous rock surfaces is responsible for the soil changes. There are 60-100 plant species per 100 square-meters, more than twice the average diversity. The density is also incredible. We find yellow-flowered primroses and rare, rosy purple Alpen Primroses. Butter yellow Dwarf Oxeye stand alone. Angular Solomon’s Seal conceal white flowers under their leaves while mountain Pasque flowers, the emblem of the park, are tiny clusters of dark purples.

The park’s south and east meadows are “prati magri” where light, poor soil on calcareous rock gives life to plants no longer found anywhere else. Here, more than 20 kinds of orchid grow.

We hike past Monte Barro’s weather tower, keeping it on our left. The trail dips into damp forest in Val Faè and then out and up for the last climb.

Near the summit we find a stark sign: “Do not stray from the path, expert hikers only.” It’s 20 minutes to the top. We put our poles away to free our hands to clamber over and grip rock. It’s not a hard climb and it’s worth the effort.

On top is a cross and a 360° view — the city of Lecco, Lakes Como and Garlate, the Alps, Corni di Canzo, the Brianza lakes and plain. We sit and picnic with other hikers, taking care to avoid caterpillars falling from trees.

These caterpillars must be a feast for the more than 88 bird species, including Spotted Cuckoos, Icterine Warblers, Willow Warblers and Pied Flycatchers, stopping over during migration to north Europe from Africa. A bird observatory on Monte Barro’s Costa Perla studies and bands birds for a European registry. Some birds, including nightjars, kites, and horn owls, remain in the park.

We reach the monastery and notice repaired railings in the park. A brand-new bench is bolted down. Everything is spic and span. A roly-poly volunteer in soiled jeans approaches.

“So what’s the occasion?” Marino asks.

“Giorno ecologico,” the man answers. “In May and October, we clean the park.” He smiles, very pleased. “Now we get a free lunch.”

As we walk down, voices rise from the restaurant.

“Lots of free flowing wine, I bet,” Marino says to me.

Details about the park are available in Italian at Parco Barro. If you’re in Galbiate, visit the Villa Bertelli and gardens (see bus service). A shuttle bus runs from Galbiate to the Fornace parking lot from May to September. Cost: €1.