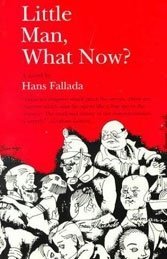 By Hans Fallada, translated from the German by Eric Sutton

Fallada’s brilliant, demoralizing tale of two naïve young people trying cope with a city of varmints doesn’t need ideological villains to portray the alienation of modern life. Hans cares neither for Nazis or Communists while Bunny, true to family tradition, supports the latter. But it doesn’t matter. There simply isn’t enough money to carry a family of three.

Duped into Berlin by Mia, her “showgirl” mother-in-law, Bunny soon discovers that hosting soirees is a Momma Mia’s euphemism for running a brothel. Though one of mommy’s favorite clients, criminal hedonist Herr Jachman, connives to get Hans a job in a Jewish-run clothing store, the grind is devastating. No one is fair; all are greedy; amorality is constant; “vulgarity and shamelessness” are the rule. Fallada puts Hans and the depression workplace through the wringer. “References: useless. Ability: Useless. Good appearance: Useless. Humility: Useless.”

By the end of the story, fired Hans and weary Bunny live as semi-squatters in a hut outside Berlin, with Bunny bringing in the couple’s income by working as a seamstress. They owe the hut to the kindness of Heilmann, a nudist and pornographer who amid an otherwise avaricious cast is alone in refusing to relinquish a deeper decency — a harsh bit of Fallada irony.

“We’re people who don’t count,” says Hans, eventually hounded by police as a vagrant. Fallada joins in: “He was just a broken-down creature without a job…” Though many were the mordant satires about urban poverty and disaffection in the “brother can you spare a dime” 1920s and 1930s, few were connected to propaganda-drenched Berlin, the growing Nazi jewel, which Fallada strips of its emerald city glow. Even the human spirit is deprived of optimism. Only love survives.

The international success of the novel (Hollywood made a movie version in 1934) put Fallada at odds with Nazi authorities, but his erratic psychological state and the admiration of Nazi Propaganda Minister Joseph Goebbels kept him out of jail. The German title was “Kleiner Mann, was nun?” Fallada died in 1947.