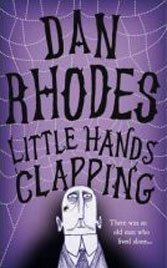 In the early 1960s, an American children’s show aired a segment called “Fractured Fairy Tales,” in which Goldie Locks was slightly less than Goldie and The Three Little Pigs had ulterior motives. Born in 1972, Englishman Rhodes had no occasion to know or watch it but his latest novel walks the same path, borrowing from Grimm, Conan Doyle and Swift at his most scatological. How else to explain a suicide museum, a cannibal doctor, an accent-memorizing custodian who munches on spiders, and an assortment of ancillary characters straight from a sexually-deviant house of horrors?

The wacky Rhodes somehow manages to comfortably and charmingly align suicide, vomit, necrophilia, cannibalism, incest, and all manner of sexual abuse and molestation, punning media sensationalism at will. The story? Let’s see. Once upon a time in Germany a woman created a suicide museum to help the despondent change their minds by showing them the details of the end-game (including a photo of Kurt Cobain’s leg). But when some of the would-be saved instead chose the museum’s rooms to kill themselves, a laconic custodian and a heartbroken doctor engineer a conspiracy, one supplying victims, the other eating them. Meanwhile, in a small town in Portugal, a brother marries sister, an event that will lead to the museum’s undoing.

Enough for ghoul-giggling Rhodes? Not in the least. There’s Hans, the penis and scrotum-eating (and vomiting) dog; the matter of whether good doctor did in fact have sex with a frozen cat; and just where is that album of malfunctioning anuses? Oh, there’s also Hulda, the German Lorena Bobbit.

Little is vulgar because Rhodes is masterfully dead-pan (Of the doctor: “He had never eaten such dark flesh before, and he couldn’t help but wondering whether it would taste any different from white. Smokier, perhaps.”) If you’re going to hunt down and tickle the macabre, why not be outrageous? Rhodes is.