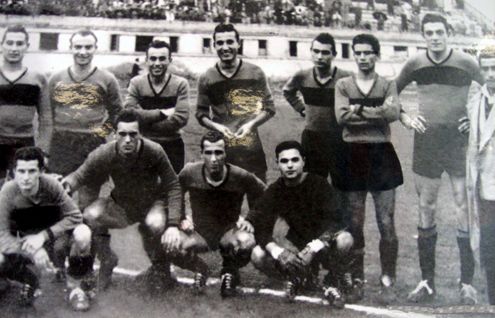 e trotted onto a sun-drenched field on Via Castiglione and greeted our rivals with outstretched hands and kisses on the cheek. Everything was perfectly in place for 90 minutes of hard-fought calcio, except our defender, Antimo, who was crouched over on the sideline, violently heaving up pint after pint of Birra Moretti onto the synthetic turf. As the referee blew the whistle, it seemed we would have to start “the beautiful game” down a man.

My first memory of calcio was as a six-year-old in my Italian neighbors’ dimly-lit basement outside Washington, D.C. For three weeks, I sat side-by-side with Maria and Dario as they patiently explained the subtleties of a sport which didn’t stop, had no set plays, and in which intentionally turning over the ball following an injury was applauded in the name of sportsmanship. I remember the contagious silence in the basement when Italy was eliminated by Argentina on penalty kicks. I was hooked.

I eventually captained my high school soccer team, won a state championship, and even played four years in college. But as a less-than-intimidating 5’8,’’ 150-pound goalkeeper, I knew that my size nine gloves could only carry me so far. Yet, when I accepted a job teaching English in Sardinia following graduation, I packed two cleats, some gloves, and — at my Mom’s urging — a pair of shin-guards, eager to make good on a childhood dream to play calcio in Italy at any level.

Most soccer fields in Cagliari are reserved for professional teams. Instead, there are hundreds of calcetto courts — literally “little soccer” where the sport is shrunken onto a 30-yard grid with six players a side to accommodate modern Italy’s lack of available space (think Roger Federer playing ping-pong). In fact, the only proper calcio field open to the public is on Via Castiglione. It seemed a likely place to look for a team.

According to a league coordinator at the field, only one squad was recruiting a goalkeeper, and they didn’t have a team name. The man passed me a ripped piece of paper and scribbled a phone number below the name “Roberto.” I dialed nervously, anticipating laughter at the thought of an American wanting to join in.

Roberto: “Have you ever played before?”

Roberto: “Do you need a ride?”

Roberto: “The position is yours for as long as you show up.”

It was the epitome of Italian job security, and I made a season-long commitment.

I met Roberto directly at Via Castiglione before the first game, and he introduced me to my teammates. There’s Simone, a lanky attacker who had never played on a team before but has promising speed; Antimo, a 250-pound defender who kicks the ball just as hard as his opponents; and the Floris brothers, both of whom play with glasses. In addition to Roberto’s central midfield role, he also doubles as the team’s coach — a loose title based on his willingness to wash the team’s jerseys and bring them to each game.

Warm-ups began with a light jog out of the locker room and finished 15-yards later at the sideline. I scrambled to remember my defenders’ names but an abrupt whistle caught me off-guard as the game began. I breathed deeply. Maria and Dario would be proud.

We trailed 5-0 at halftime. Our attack had yet to shoot on goal, our midfield was non-existent, and our defenders left the game every 15 minutes to smoke cigarettes — a trend that has continued throughout the season. Lacking the proper lingo to direct traffic on the field in Italian, I was left communicating in an insensible string of gibberish.

Antimo’s second-half head-butt in the box was the nail in the coffin, and the other team converted a penalty kick as the final whistle blew. We lost 7-0. I shuffled back to Roberto’s car, regretting my verbal commitment. Just then I heard one of the Floris brothers behind me.

“Thanks for coming, Elio.”

After 11 games, our team had yet to win, despite most teams playing down a few men. Our only three goals had come from the feet, head, and back of our own defenders, and finished in my net. After each loss, the team sits in a circle and chain smokes, discussing what we need to do to improve. By everyone’s fourth Marlboro, the team usually concurs that “general fitness” is an issue, and promises to train during the week. But we are improving.

Little did we know it, but our hard work was finally going to pay off in week 12. As Antimo lay bent over, recycling his Saturday night onto his shoes and the surrounding turf, Simone steamed past our opponents and scored! The goal lifted Antimo to his feet, and our team to its first win of the season. Call it fate, luck, or chance, but we finally knew what to call our team: “Birra Moretti.”