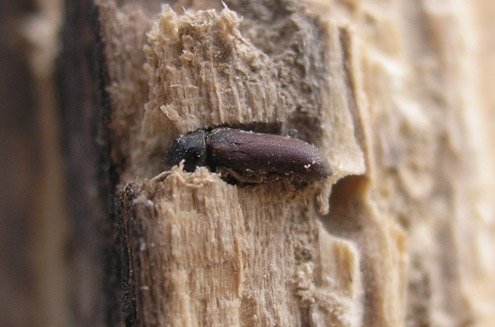 Tarli, or woodborers, love antiques, and one thing can lead to another.
A

nything can happen in life, but there are times when “enough is enough” sounds just as good in Rome as anyplace else.

When my American wife told me she’d be taking our kids to her parents’ house in Florida a month before my summer break, I felt like I’d hit the summer lotto. And for a few days, I had.

After they left, I’d spend my post-work afternoons listening to music in front of my Mac without a care in the world. Then, after dinner, I’d grab a drink with a friend. Most important, I actually slept.

But all this bliss didn’t last long. Maybe I was just too happy, and someone noticed. (Yes, I’m Italian, and yes, I believe in bad luck.)

One night, I woke up suddenly. My first thought was that I missed my wife. Tossing around, I heard what sounded like a whirring sound coming from the antique mirror over our bed. End of peacetime: the mirror was infested with woodborers. After a sleepless night, I decided to act.

I took the mirror to a guy who disinfests furniture, about the only “cure” for borers. He put items into a giant microwave oven where they’re basically left to toast for a few hours. The elevated temperature (about 70C, about 160F) kills off the insects, larvae, and eggs. The only caveat, the guy told me, was the possibility that the mirror’s paint contained real gold flecks, which can spark.

Guess what? The mirror frame was gold-encrusted. But since I’d bought it at the flea market for a few euros I assumed it was all for show. “Well, I guess we’ll see,” said the guy, who took it to his heat chamber.

After a few seconds, he shut down the microwave. The gold was real, he told me. By chance, an antique dealer also happened in the shop. He took a close look at the frame and told me it was authentic, probably early 19th-century, while the mirror itself was newer, likely installed after the old one shattered. Still, the mirror was Venetian, the kind people usually placed above beds to make nights more “romantic,” or so legend has it.

Amused by the goings on, the exterminator, since his oven was useless, told me how to make a simple “home-style” gas chamber using a plastic bag and poison. Basically, I had to put the mirror in the poison-filled bag for 20 days to kill off the worms. It sounded simple enough.

A few nights later, fast asleep (no more borer chomping), I was startled out of sleep by something crashing down and by what sounded like footsteps. After that I heard dishes breaking.

Thieves on the terrace! It had to be. My heart was racing. I jumped out of bed, turned on the terrace lights, grabbed the cordless phone, and faked a 112 call, the Italian 911. I shouted loud enough to let the whole building know.

The noise stopped, so I decided to creep out onto the terrace (rolling pin in hand). Slowly, I edged toward where I thought I’d heard all the noise.

Squatting in front of me was large seagull, which, don’t ask me how, had made its way from the terrace into my son’s playhouse, had rummaged through my son’s plastic things, had gotten trapped, and basically had gone berserk. Its droppings were everywhere.

“Get lost, you ugly bird!” I screamed (I’ve never had a way with birds). The gull, maybe insulted but not intimidated, winged its way at me. It had no interest in leaving. Instead it seemed determined to make a nest in my son’s plastic stuff.

Next step, weapons. I grabbed a broom. I eventually chased out the gull, which landed on the ground floor garden below the terrace. Back to sleep? Not on your life. I just lay there looking at the ceiling. The next thing I heard was the morning alarm.

There’s another common expression that my grandmother used to say: “Bad things come in threes.”

Though I was uneasy after incident no. 2, nothing happened. Everything seemed quiet. Then, the next week, as I was savoring an especially good cup of coffee at home before heading for work I heard tires’ screeching, impact and then glass shattering. I looked down to the street from my terrace to see a badly bashed scooter.

My first thought was about the driver — until I saw it was my scooter.

Nearby was the truck that hit it, with two guys looking like they were about to jump in and take off. “Stop!” I screamed, and ran downstairs. One of the two told me he’d left a note on the scooter with their IDs. I ironically asked them just where exactly they’d put the note, since the scooter was basically a heap of tangled metal.

In any case, we started exchanging information, which is when I suddenly noticed the scooter’s helmet case was gone. The truck had hit it so hard that it landed in the garden of the school next door. How had this happened in the first place, since I was legally parked? Please don’t ask.

I thought about my grandmother and her insistence on bad things coming in threes (I did think of walking over to St. Peter’s, which is only five minutes away, and taking it up with Him, but dropped the idea).

Oh, and I did make it to Florida, thrilled to see my wife and family and glad to have left crazy Rome behind, at least for a while. The worst was over. Or was it?

“Oh,” said my wife in the car, “you know how you loving cooking for my parents?”

“Well, this year they’re on a diet, which means no bread, no pasta, no rice and no dairy products.”

Suddenly my face started twitching, after which came hysterical laughter, and yes, a few tears. Next year, maybe I’ll learn to cook gull.

— Place the salmon on a baking pan, add salt and pepper.

— In a small bowl, mix the juice of 1/2 lime with honey and olive oil and sprinkle the mix on the salmon. Cover the salmon with lime slices.

— Finally, stir the onion and mango-fried cilantro together and cover the salmon with the mix (the fish should be cooked and caramelized by then).

— Mix all ingredients, adding salt and pepper. Mix the lime juice with the olive oil and dress the salad.

— Throw all the cubes in boiling water. When the water boils again, give them 10 minutes. The potatoes should not be completely cooked.

— Take the cubes and place them under cold water. Dry them on a towel and mix with salt, pepper, chives, and extra-virgin olive oil.

— Place them on a baking sheet and into the oven along with the salmon.

If you’re dieting, you can use steamed basmati rice instead of potatoes. As for wine, I recommend a Californian Sauvignon Blanc.