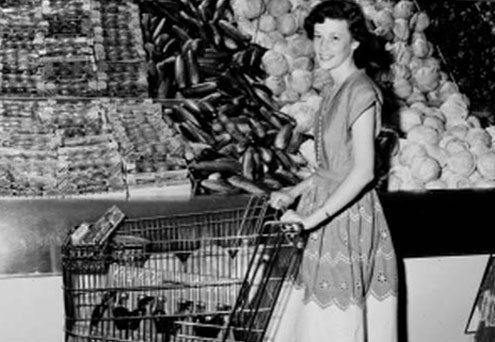 Thank you, Sylvan Goldman: he invented the supermarket trolley, first used in 1937.
I

have a degree in art design and film. And while I laboriously partied away my education, I actually did manage to attend a few lectures, some of which stuck in my unrepentant brain.

Art history held no fascination, even after some study. Even today, I still subscribe to the “I know what I like” school of art, a viewpoint no one has managed to make me change. For good reason. It’s a perfectly valid approach. I’ve yet to meet an art historian able to convince me that something very bad, like an unmade bed, is good.

But my education wasn’t a total loss. I’m still intrigued by how domestic inventions can change the course of history. There are many military examples, some with medical parallels. Take superglue. It was invented during World War II for plastic gun sights. It didn’t work. After that it was marketed as an adhesive. But decades later, during Vietnam War, it was also employed on the battlefield to stick skin back together quickly. Rock climbers and musicians still use it today.

My own interest in design history tends to involve domestic appliances. For example, I delight in knowing that the invention of the lawn mower — the year was 1827 — changed the look of British domestic architecture to include a lawn. And where would people be without it? No croquet for a start. Or consider the motorized vacuum cleaner (1901), which meant we could have carpets in our homes and eradicate bed bugs.

It didn’t catch on straight away. He actually had to pay people to wheel them about. He had to prove to men that using them didn’t insult their masculinity, and to women that it wasn’t just another pram. But the idea itself was a bit of commercial genius.

The trolley, or cart, meant that people could suddenly buy much more than they could possibly carry, which in turn meant they had to get a car to go shopping. Take it a little further, this inevitably led to the concept of the out of town shopping center (mall). Consider for a moment the ripple-effect impact this one idea had on everyday life.

In the UK it was quite normal for us to go to the supermarket once a week and stock up on food, some of which we didn’t eat and, to our shame, ended up in the bin. We’d buy far more calories than we needed.

But it was only after we started a family, and my son discovered the joy of running amok in the supermarket (he once demolished an entire isle of toilet roll and smashed a five-liter flagon of olive oil), that we learned about the joy of visiting the local greengrocer. One aspect of Italian daily life that we most loved was how everybody shopped every day (and locally) for the things that they didn’t produce themselves.

A decade ago you could spot supermarket stranieri a mile off. They were the ones with a full trolley full of food while the locals carried their purchases. But things are changing fast. Shopping centers have come to our rural landscape. One of them even has a McDonald’s.

But Italian change often comes slowly. For example, most stores still close for lunch and the outside trolleys at my local supermarket remain rusted together, unused. (Except my own personal trolley. With five children you can’t expect me to carry 10 liters of milk once a week.)

It is at moments like these when memories of my hard-earned art design degree come back. I thank the inventors of the lawnmower. I applaud the makers of the vacuum cleaner. And I reserve a special place for Piggly Wiggly’s Sylvan Goldman, who once-upon-a-time decided that a set of indoor wheels might not be such a bad thing.

May your trolley steer straight.