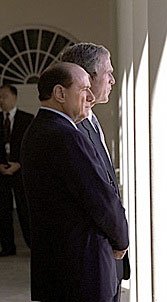 If Ronald Reagan was Teflon, Berlusconi is taffy.
C

ount on Silvio Berluconi for entertainment.

First, he tells the Italian press in Washington that George W. Bush fears regime change in Italy — this ahead of national elections next year.

Then, pressed a little, he corrects himself.

Do the math from Bush’s eyes:

You have an ally. The ally is a sycophant. The ally adores you. Two plus two equals four.

Translation: George didn’t pledge allegiance but would if he could.

Berlusconi is tranformed, suddenly, into a damsel-in-distress: Suicide terrorists plotted to blow him up inside Milan’s San Siro stadium, which he visits frequently because he owns the Milan soccer club.

“I’m the object of a direct threat, a suicide bomber in a stadium aiming at me.”

Later, badgered to explain exactly what he’d told the daily “Libero” about the terrorist conspiracy, he tacks abruptly. “It’s not about me,” he tells state television. “Italy’s involved. Can’t you tell the difference?”

Rehearse cool stuff to say about yourself long enough and the mirror eventually says “whatever.”

If the Italian left weren’t so vituperatively disorganized and gnawingly self-destructive it might have expunged Berlusconi long ago. But it is and it didn’t.

He’s also been helped, curiously, by the media he so detests. The British piled on early, alleging blatant conflict of interest and questioning his fitness to lead. When it bothers with him at all, the American press lampoons him as a Latin pocket mogul, a mini-me Mussolini parked in Italy, the West’s political equivalent of incontinent South America.

Berlusconi’s vanities (concerns about his height, eyebrow tucks) and his malapropisms (he’s cheerfully offended Germans and Swedes) established him as a cliché who happened to run a country.

In a Europe where only the names Blair and Chirac get wide berth, Berlusconi’s reverse accomplishment — the imposition of an cloying and annoying presence — is a triumph.

So is his ability to endure five years as prime minister, a once inconceivable stretch for an Italian leader.

If Ronald Reagan was Teflon, Berlusconi is taffy.

Criticism sent his way snarls and softens. Hurl more and he morphs into a comic book hero who mocks lasers and talks in why-me platitudes. Don’t stop, he says, I need the attention. And the pathologically skeptical left gladly obliges with dilapidated insults.

Nearly five years into his tenure Berlusconi behaves as unabashedly as he did at the start: It’s all about him. Bush is about him, terrorism is about him, enemies are after him, the judiciary hates him. Only the people, Oh Beloved People (recruited mostly from the affluent right, the deep south and northern fringes), give him his due.

Ignore naysayers, he advises, he knows he’s loved. And he believes himself. Why else would Bush wink and terrorists scheme?

So perfect that foreigners are flummoxed by their fruitless attacks.

So perfect the left can’t figure out just how to get the better of the comic book.

If Berlusconi yields aspects of Mussolini, let him at least do so amusingly. Exhibit A comes from an article titled “Mussolini — A Character Study” published in the July 1928 edition of the magazine “Current History”:

“In the summer of 1925, having been granted an interview with [Mussolini], but having learned that its text would be written, as is the case with most Mussolini articles and interviews, by one of the attachés to the press bureau, I secretly asked permission to write it myself. I produced 3,500 words of what I considered Mussolinian text and submitted it. A few days later it was returned to me, approved, somewhat reduced in length but otherwise unchanged. The next day Mussolini received me. His first words were: ‘I have given you a long an important interview, one of the most important I have ever given an American.’ No one told him I had written it. No one dares tell him half the truth of what is daily going on in Italy.”

The interviewer was my father.

Italy’s most recent entertainer would make him roll his eyes.