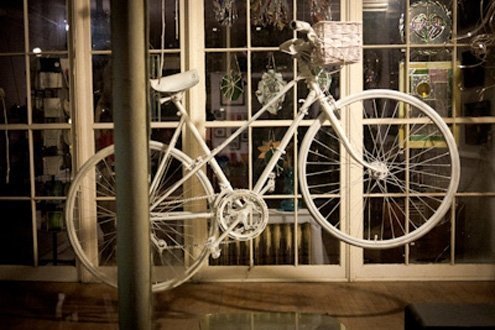 pend time in thumbprint-sized Thomas, West Virginia and it soon becomes apparent it’s not your average mountain town. Sure, it’s tiny — population 500 — and isolated, a national forest on its doorstep. There’s also a main street with red brick buildings, Front Street, and behind it homes divided by large lawns. Yet the small-town trappings can fool you. Thomas sizzles with a collective vibrancy strong enough to rival that of any big city.

The hum originates on Front Street itself, where shop and storefronts proliferate. It’s an unusual revival for what was once a merchant-rich coal town and a stop on the West Virginia Railroad. In 1910, the town had 2,300 residents. But as money began pulling out of coal, places like Thomas were left to languish. Which makes its 21st-century rejuvenation nothing short of miraculous. If miracles can also be defined by hard work and vision.

Thomas is unique for the people who conceived, set up and now run the art galleries, restaurants, cafes and bars that dominate the buildings both on and behind Front Street. Most of them are urban American migrants who found their way here through word of mouth. Once settled, they planted roots and took the initiative.

My good friends Kimberly Trathen and John Ryan Brubaker split the year between Thomas and Brussels, Belgium. Their stake in Thomas is part-ownership in The White Room gallery, on Front Street of course, which two artists, Seth Pitt, an illustrator, and Nathan Baker, a metal sculptor, opened nearly seven years ago. Trathen’s leather bags, wallets and accessories, made from repurposed leather, hang from some of the gallery’s walls. Next door, the four share a studio they use as exhibition space. For Trathen, the studio defines the intimate, personal side of Thomas, which she doesn’t feel in Brussels, where she works from home and sells most of her goods online. On her website, she describes herself as “a one-woman textile design studio.”

But in Thomas she’s not alone. “I love being able to bounce ideas off my friends and vice versa. It is also great that the studio is attached to the gallery, so I have closer contact with the people buying my work.”

Brussels and Thomas intersect in the designs of Trathen’s leather bags and other work. Brussels provides contemporary style and fashion while Thomas introduces West Virginia’s folk traditions. In a new and culturally mixed project, Trathen is using leftover leather to create reclaimed-leather tapestries. “Even though my quilts are more contemporary than folky, they weave together stories and histories of my life with others in the area by way of the second-hand nature of my materials.”

Sculptor Baker came to Thomas (he calls it “a glorious little town”) by way of Oregon. He founded The White Room on a whim about a year after he arrived in 2008. “Walls I could hang things on became available in the building where Seth and I lived. The rent was cheap and we knew a lot of creative people who could also use the space, so we went for it.”

The decision sparked a new creative cycle for Baker, who describes himself as always being a maker of things. “But I was in no way an artist in any professional capacity before The White Room happened. Having blank walls to fill was of the utmost importance. For me creating things is essentially an exploration into the great unknown that surrounds us and that we all represent.”

Baker has recently been inspired by the challenge of abstract minimalism — working within tight parameters — and the transformation of thrown-away items into what he calls the “successful-piece zone.” His metal sculptures, chandeliers and wall hangings, most made from repurposed metals, represent an attempt to balance the lightness and sharpness of his materials.

The White Room is one of a number of artistic enterprises. Singer-songwriter Yes Alexander divides her time between Thomas and New York City and is busy recording a new album. Salud, a small eatery and apothecary, recently opened its doors and features a local guest chef every Wednesday night. With so much talent fit into such a small space, Thomas’ good vibrations are no surprise.

Getting there and lodgings: Thomas is a half-day’s drive from Washington, D.C. or a full day’s drive from New York City. There’s a great Bed and Cocktail called Cooper House on Front Street.