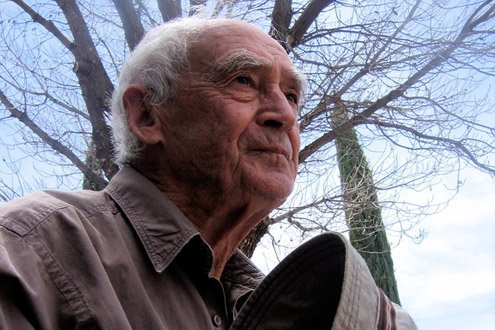 Paolo Soleri, a disciple of Frank Lloyd Wright, was considered among the 20th-centuries most visionary architectural thinkers. He died in April 2013.

In the vivid prose that accompanied his 1970 “Sketchbooks,” Italian-born architect Paolo Soleri offered a poetic and pragmatic view of humanism. In describing bridge design, he called manmade crossings “a symbol of confidence and trust … a communications medium as much as a connector.” Bridges, he explained, linked “people, software and hardware” that together formed part of a “a vast network of stresses…”

Soleri, who died in April 2013 at age 93, spent a lifetime speculating on ways and means of relieving humankind from its “network of stresses” by designing communities and cities he hoped would be in greater harmony with the environment, eventually developing an ecological view of urban planning that he dubbed “arcology.”

Born in Turin in 1919, Soleri spent most of his formative years in northern Italy, watching as Benito Mussolini and his coterie of architects worked on creating a triumphalist Italy. They envisioned a new Roman Empire founded on wide boulevards, concrete structures, and whole new neighborhoods, all them intended to exalt the priorities of the ill-fated Fascist regime.

Just after World War II, his Italian doctorate in hand, Soleri left Turin behind to attend American architect Frank Lloyd Wright’s apprenticeship program at Taliesin West in Arizona’s Paradise Valley. Taliesin West was both Wright’s winter home and a high-level school. On a mesa north of Phoenix, he and his acolytes sought to integrate architecture into its surrounding landscape and wildlife. It was a self-sufficient approach to urban design that Soleri would later formally adopt and promote for the rest of his life.

Soleri returned to Italy in 1950, where he was asked to design a vast ceramics factory, Ceramic Artistica Solimene, in the city of Vietri on the Amalfi Coast. He soon became fascinated by the potential of ceramics, using it extensively in the factory’s design. He created wind-bells from ceramics and bronze that would later feature in all his buildings. Italian newspaper critics compared aspects of Soleri’s Ceramica Artistica headquarters to the work of unconventional Catalan Antoni Gaudí.

But Soleri’s sweeping vision did not fit the conservative tone of Italy’s 1950s boom. In 1956, he settled in Arizona, where he designed and built a gallery-studio near Scottsdale that he named “Cosanti.” The visionary desert complex, where he lived with his wife Colly, included terraces and subterranean chambers. He used a combination of earth and concrete and incorporated solar power. Even the name “Cosanti” reflected Soleri’s non-conformity. In Italian, cosa means thing, and anti against. Later, in 1970, while lecturing at Arizona State University, Soleri began building Arcosanti, an experimental community north of Phoenix that would be based entirely on arcology — an attempt to build prototype urban living spaces that would do the least possible harm to the land of its site and incorporate what the land and environment had to offer “A central tenet of arcology,” he wrote, “is that the city is the necessary instrument for the evolution of humankind.”

Soleri sought to reverse commonplace urban trends, in which cities “literally transform the earth, turn farms into parking lots, and waste enormous amounts of time and energy transporting people, goods and services over their expanses.” His idea, he said, was “urban implosion rather than explosion.”

Long before solar panels were widespread, Soleri created sunlight-friendly structures as well as greenhouses and earthen amphitheaters. Arcosanti over the years developed a community in which hundreds of people interested in Soleri’s theories were able to see them operate up close.

Among them was Lisa Scafuro, a New Jersey-raised student of architecture who first encountered Soleri, who was a guest lecturer, as a student in the 1970s while attending Arizona State University’s College of Architecture. At the time, Scafuro also visited Wright’s Taliesin West and Cosanti, “which left a profound impression on me.” After 17 years of working in architecture and construction on the East Coast, Scafuro finally returned to Arizona, forging a close friendship with Soleri. With her interest in writing and filmmaking — Scafuro decided to make a documentary based on Soleri’s life and work called “The Vision Of Paolo Soleri.”

From the start, she was fascinated by Soleri’s “sustainability concepts — complexity, frugality, and miniaturization,” and the Italian-born architect’s “impressive futuristic renderings of what cities could evolve to be.”

Scafuro began the project in 1998, after meeting veteran documentary filmmaker Ken Burns at Taliesin when he unveiled his film “Frank Lloyd Wright.” Encouraged by Burns, and after years of research (and occasional setbacks), Scafuro’s self-funded film project has finally come to fruition. “The Vision of Paolo Soleri: Prophet in the Desert,” released by her own Mona Lisa Film Productions, made its world premiere at the New Hope Film Festival in July, and will make its New York City debut in October. Corinna Amendola chatted with Scafuro about Soleri and her project. These are excerpts from their conversation.

What most struck you about Soleri at a human level?

His soft spoken and insular nature. He was a largely humble man who lived what he’d embraced, a non-materialist life dedicated to simplicity and respect for nature.

Did you still feel “the Italian” in him, even though he’d left his native land long ago, married an American, and raised a family in Arizona?

Soleri’s way of thinking was rooted in his classical European training and the formative years he spent in Mediterranean Italy. His prolific drawings are reminiscent of the great Italian masters. Even his physical method of sculpting earthen mounds at Cosanti was graceful, elegant and seemly European in nature.

Wasn’t he detained when he first arrived in the U.S. just after the war?

Yes, in 1946, for 35 days. He was confined to Ellis Island, which had a lasting effect on his psyche.

It also changed his perception of the American Dream, which he later branded a myth. He thought he materialism and hyper-consumerism had produced a lack of fulfillment and wastefulness.

At the same time, he was fascinated by Hollywood movies. They were an integral part to his weekly routine. His Saturday afternoons spent at the movie theater continued well into his 90s.

What was it about Soleri’s “futuristic” notions that was most appealing?

He boldly encouraged mankind to envision and re-imagine the world. The magnitude of this effort is a complex balance between nature and technology. On both a philosophical and practical level, he was determined to preserve nature by having as little impact on the surrounding environment.

Was there something about the desert landscape that “got to” Soleri? Here was a young Italian who went from an elegant and staid city, Turin, and eventually settled in what some in his country would call “the middle of nowhere” — how do you account for it, personally?

The encompassing beauty of the Arizona desert entranced him. So did the magnetic presence of Frank Lloyd Wright. His first reflections on Arizona contained a telling sentence: “I’m there to be a sponge!”

Would you consider Soleri an eccentric, and if so how did it show?

Many great artists and thinkers tend to what some might perceive as eccentric. The way he dressed comes to mind, since even as a graduate in Turin it wasn’t unusual to see him riding a bike wearing only shorts and sandals — even in winter. He rarely conformed to the mainstream. He eluded the constraints and formality of a tie his entire life.

What made you think a documentary was so important? Was it his work itself or the importance that others knew about it?

Soleri compelled mankind to look to the future. His ideology is more important than what he built. He boldly asked mankind to … recognize there was only one Planet Earth. Soleri constantly asked questions about man’s environment and his future.

What were the biggest challenges in making the film a reality?

I pursued several major Los Angeles and New York producers. Though many were intrigued, no offers came forth. Soon, I realized the film had to be a solo project. That’s why the production has spanned over a decade. I’d never produced a film, but perseverance is my strength.

Soleri had a serious nature, but in private he maintained a fantastic sense of humor in a quiet and subtle way. He always managed make me smile.

Soleri had plans for a futuristic city located in the high desert region of Arizona. Is there any chance it’ll ever be completed?

CBS correspondent Morley Safer asked Soleri a similar question for the “60 Minutes” profile aired in 1981. Soleri replied, “Even if I failed in applying those notions in developing a prototype of a terra, somebody new is going to pick it up after me.” Safer followed up, asking, ” In your lifetime, do you think?” Soleri replied, “It doesn’t matter that much.”

Did he ever discuss his relationship with Italy, since the American desert couldn’t have been further than the Turin of his birth?

Italy was always closest to Paolo’s heart, especially in later years. He received high honors from around the world, but I think the Italian ones meant the most.

How did you choose the people to interview for the film?

I developed a relevant list story early on. Getting the interviews was a combination of luck and perseverance. Few realize that Catherine Hardwicke, director of “Lords of Dogtown” and “Twilight,” was a practicing architect prior to her successful film career. As a University of Texas architecture student in the 1970s, she attended a guest lecture series featuring Soleri and left captivated by his urban planning concepts.

Architect Eric Lloyd Wright was poetic in his recollections, which gave a fascinating glimpse into the world of his grandfather Frank Lloyd Wright and Soleri’s Taliesin West years. Will Wright, the creator of the SimCity computer game series [unrelated to architect Wright], incorporated Soleri’s arcology theories into the design of his innovative computer games.

There’s a wonderful Soleri quote that uses the piano as a metaphor: “Ultimately, the cities that we build are like pianos and people are the music. Without good compositions and skilled musicians, the piano is useless.” I kept that in mind in getting licensing permission to include music written and performed by Andrea Bocelli as well as Jared Leto. [The band] “Thirty Seconds To Mars” is an absolute dream!

Based on your interest in Soleri and your travels, do you have a favorite city, not in terms of tourism, obviously, but layout and “humanity”?

Though not exactly a city, Sanibel Island in Florida in its pre-1970s period was what I considered heaven on earth. In 1961, my father heard about this fantastic little island off the Gulf Coast. It had everything an artist’s heart could desire: gorgeous white beaches teaming with an exotic variety of shells, flora, fauna, wildlife, nature preserves, and a smattering of rustic beach cottages. During the 60’s, the individuals that resided or frequented Sanibel tended to be from artistic backgrounds. For a young girl who respected and loved nature, it had an enormous impact.

— For more information, see the film’s Facebook page and its official trailer.