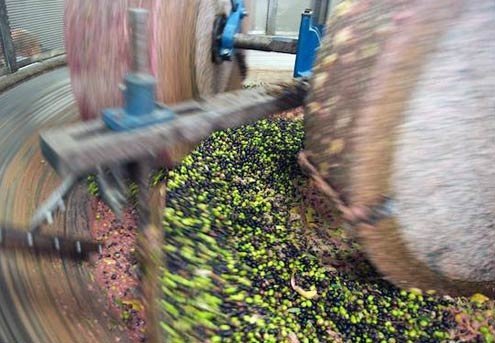 xtra-virgin olive oil, like wine, can attract an awful lot of snobby nonsense. Pretty bottles and pastoral branding are seductive. People get taken in. And it’s true: the best olive oil is first-pressed, extra virgin.

But putting aside pretty containers and “hail farm-life!” labels, I sometimes wonder just how many of us actually get what the battlefront promises. The olive oil is a corporate industry like any other. Descriptions can be tweaked to mean anything (the Italian olive oil industry was hit with two major adulteration scandals in 2008 alone). Plus, pressing olives is hard work. I know. I’ve done it.

In Le Marche, olive presses are open from late October to Christmas. Every time I drive past one I’m wracked with guilt that I am not out there in the fog prizing recalcitrant olives from spiky branches. But I’m not, and somehow I might just skip it this year.

The truth is that olive picking doesn’t quiet match up with the romantic imagination. Those who lovingly dip focaccia into delicious peppery oil often conjure up images of sunny olive groves with jolly peasants laughing as fresh-of-the-tree olives plop obligingly into their waiting nets. Ah, those lucky peasants! Meanwhile, they’re scheming a picnic lunch.

Firstly, when olives are picked the weather is usually cold and wet.

Secondly, olive groves tend to be planted on slopes to prevent their roots from rotting in waterlogged soil. That means pickers must scramble around on a muddy bank trying to gain purchase.

Thirdly, olives do not fall easy into a net. They cling stubbornly to their trees until someone comes along to literally pull them off.

The first year we lived here we did our picking with enthusiasm and emerged with a fine crop after about a week. Excitedly but naïvely, we packed up the car to the groaning point and set of for the press.

The process itself is quite simple. The presser and his men take your olives, shake them in a grill to separate out the leaves, and then grind them to a pulp between two enormous stones. It all looks like something out of an Indiana Jones film. They then squeeze the pulpy paste onto stacked together woven mats and press it until the lovely oil begins oozing out.

Perfectly straightforward, except for one thing: the man who runs the press spends most of the year in anonymity and the moment you’ve arrived represents his moment to shine – or in our case to make everyone’s life a misery. He’s by far the rudest man I’ve ever met.

The circumstances give him leverage.

The whole area descends on him to get its olives pressed, which means they absolutely rely on him. For 90 days he wields a mighty power over the community and enjoys using it.

That first day he sent us packing with a flea in our ear, apparently to teach the stranieri that they couldn’t just show up and expect him to do their bidding. We were “outsiders,” after all. This left us with a car full of olives and a bit of a problem until our neighbor Mario intervened and took us back to the press.

I don’t know what kind of deal was struck. I do know after some wrangling he finally (and ungraciously) agreed to press our olives. Pathetically grateful, and after a humiliating three-hour wait, we left after having paid twice as much as anyone else for 50 liters of oil.

Fruit trees are inconsistent, with a good year sometimes followed by a bad one. Next season our yield was down significantly, well below the minimum weight required for pressing. We had but one choice: face the scorn of the press owner and try and swap our olives for some oil.

I was weepy and pregnant at the time and couldn’t face another tussle with Il Duce so I sent my husband off to broker a deal. Heaven knows how he managed, but the presser finally agreed to a swap. But first we had to wait a week, spreading out the olives out in a cool, dry, room so they wouldn’t rot. We followed his instructions and hoped for the best.

On the appointed day we took our olives down and added them to a growing pile (apparently others had shared our shortfall). Finally, we picked up the equivalent weight in oil.

Pleased with our hard-earned oil, we sat down to lunch just as our son came home from school. I passed him a bottle of the new oil for his salad but he didn’t seem very enthusiastic.

“Is this made from our olives?” he wanted to know.

“No,” I replied “the presser took it out of the main tank.”

“Oh, that’s all right then,” he said, now happily pouring it over his salad, “because the cat’s been pissing on ours all week.”

So, when you next hear someone pontificating about the wondrous aroma of hand-picked, first pressed luxury oil, consider the cat.