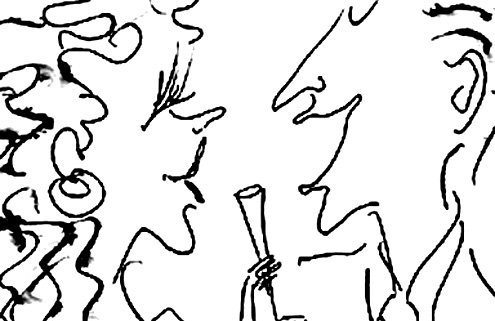 Go for Campari or Cinzano ...
W

hen it comes to a serious meal, the aperitivo is foreplay: meant to tease and stimulate the taste buds in preparation for the main courses. And with all due respect to James Bond and the gunslingers in old Westerns, the best way to do that is not with something that comes out of a bottle that says 80 proof on the label and that can leave the tongue feeling like it’s wrapped in gauze.

In the English-speaking world, where many a stiff drink has ruined even the finest food and wines by making them seem clumsy, the before dinner drink is probably the least understood part of a meal. But Italy has had a long tradition of superb and tasty aperitivi that wake the taste buds and stimulate the appetite.

Most of the best Italian aperitivi come from northwestern Italy — either Turin or Milan — where in the 1800s many of the best restaurants served home-spun blends of spirits flavored with herbs and spices as a way to get patrons to eat more. Some of the best names from those days — Campari and Cinzano, for example — remain a great way to start an important dinner.

But what to consider as you await your friends in a restaurant bar is getting a good balance of bitterness and acidity, but without too much sweetness (which close up the taste buds) or alcohol (which numbs them).

One friend of mine more or less concocts his own version of what in English we call aperitif (from the French) by asking a bar tender for a glass of dry spumante with a few drops of cassis — a subtle and classic blend between the lean acid backbone of the wine and the thick fruitiness of the cassis.

Other friends have told me about the Venetian Spritz, made from some dry or semi-dry prosecco, a splash of mineral water and a bit of Campari, Cynar, or Aperol. It’s served with a green olive and a slice of lemon if the mixer is Campari or Cynar, and just an orange slice if it is with Aperol.

My tastes, though, tend generally toward the simple. More often than not I order a simple Campari and soda before dinner. The good folks at Campari say the drink is made of a secret blend of some 86 herbs, roots, spices, and extracts. And it is famous enough that artists sometimes refer to its bright color — which comes from a natural pigment called cochenille — as “Campari red” (though it’s close enough to the color of a Valentine’s Day heart to offer another reason to order one on the 14th).

Campari and most other traditional Italian aperitivi trace their roots back to medicinal potions that over several generations evolved into something 19th-century diners drank before eating.

A good example of that lineage is Aperol, which is orange in color and made of rhubarb, orange extracts, gentian, and aromatic herbs. It tastes better than it sounds, I promise.

Cinzano is the oldest of Italy’s most popular aperitivi, tracing its history back to 1757. My favorite is the Cinzano Bianco, a kind of semi-sweet vermouth with a slight taste of cinnamon. It is not unlike a Martini & Rossi Bianco, which has a bit more bite to it. Both are best on ice or very cold.

Cynar, which is an artichoke- and herb-based liquor, is among Italy’s most interesting aperitivi. Drink it straight or with soda and you have a very appealing way to start a meal. What makes it unusual is that artichokes are among the few vegetables whose chemistry can’t be successfully matched with wine. That doesn’t seem to have an effect on the way wine tastes after a glass or two of Cynar.

How do you know if the aperitivo you ordered is doing its job? After the drink you should feel more alert and hungry (rather than sleepy or tongue tied, which is what can happen after a couple of glasses of Scotch or bourbon). In short, it should leave you ready for the main event.