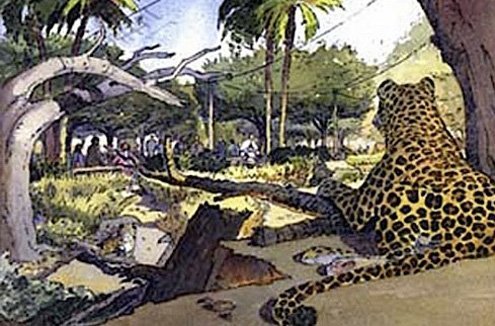 tter, walrus, sea lion. One of them for sure. They hype their braying like divas. “What’s that?” the girl asks, her chin nicking your collarbone. You don’t wince.

But you know about the lions.

They do their meat song early.

First comes the marooned sulking, which sounds like five old tenors with a cold. Then they get serious and seem to snarl at their own loose howls, producing punchy snorts.

This always gets your attention. You know what time it is: two in the afternoon. The timepiece lions, you call them.

I live above the Rome zoo, which, in summer, makes good on all manner of animal foreignness.

Wild mammals remake themselves in the relative quiet. No helicopters to compete with, no clanking traffic to muffle roars and whooping. Summer arranges the scene into sounds. Relaxed, the captive animals dispense mauve noises by their river, Rome.

Oh yes, and here a zoo is not called a zoo. It’s a bioparco, literally the “biological park.” And if that sounds like a place where stem cells get harvested blame it on politics. Some time ago, the Left insisted that “zoo” sounded too much like, well, zoo. An eco-friendly alternative was needed. The ongoing protocols of mammalian correctness elude me, and probably the animals as well. In any event, the eco-bio environment still includes cages.

That doesn’t change the noise, or that a sea lion (or an otter, or a walrus) sounds like a muffled orgasm on low batteries.

Now she’s staring out the window, looking for the source. She doesn’t look happy.

What’s that noise? Is it always this way with you?

You just happen to live above the zoo, you answer. Beastly noise is your friend. It could be the elephants, you tell her, buying time.

But you know better. The elephants howl in the late afternoon, so many earthy trombones low on tune. Give them what they want and they shush.

My mammal-feeding speculations are met with skepticism.

She puts a perky finger in shallow liquids to reattach a contact lens. “You can’t fly with this any more,” she says, referring to the liquid but pointing at the bed. “It’s the terrorists.” She also can no longer travel with her favorite pillow, she explains.

The animals, she adds, disrupt her mood. Everything is so confusing.

Maybe the walrus (or the sea lion, or otter) is suffering a panic attack, you say. You’re kidding.

Aren’t you afraid? She means the germs. She read an article: terrorists could poison animals, which in turn could poison children. And the air.

Mussolini groomed the zoo in the 1930s (it was founded in 1908). He wanted Italians to marvel at empire and the African beasts he brought home. A zoo was always empire material. A human park might contain a German, a Korean, a Vietnamese, an Iraqi, symbols of where you’d been, what you’d come up against. The non-zoo world calls this cultural integration, or globalism, but tell no one.

From her, more about germs: Botulism. Ebola. Hives. Foot and mouth. The zoo is too near the park, she says.

She’s now applying waterproof lipstick that is biodegradable. It resists the disruptions of kissing and oral sex. It’s made from roots and plastics. It is, unlike the century, admirably resistant.

The braying refrain starts of again followed by the shrill voice of a woman who announces in Italian and English that the biopark is about to close. Leave now, she tells visitors. Or else, the girl adds.

The otter (or walrus, or sea lion) is attracted to the announcer’s voice, which provokes a great flap of new keening. This time their might be a fussy monkey.

I’m out of here, says my friend.

I try dissuading her.

Think of the zoo as, um, a parable. Zoo, jungle, all things primitive walking around in 17 wild acres (according to the brochure). The unhinged noises tell the story of another time. No cars. No trams. No mobile chimes. Just one vast feral island outside the rules.

I pause for effect.

What, she asks, is a parable?

I walk her to the door. She’s wearing a beige knock-off blouse from a major stylist whose name she mentions but I promptly forget.

You should fix that thing with the animals. The bionics. The sounds. Weird.

When I return to the bedroom I give the walrus (or the otter, or sea lion) my complete attention.

It’s what they crave.