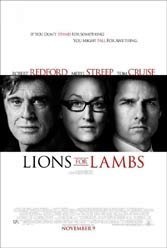 It’s understandable to make want to make an idealistic political “thriller” about the twin-pulls of duty to country and Iraq-tempered skepticism. But only a strong and coherent story, “Syriana”-style, can save such an undertaking from becoming that least appetizing of animals — the liberal Hollywood sermon. There’s no saving director Robert Redford’s cut-and-paste job about idealism gone awry. Start to finish, it’s plagued with bad planning and hackneyed pitfalls — a bit like some war efforts.

He loosely ties together a California political science professor (Redford), a gung-ho U.S. senator with a new plan to “win” in Afghanistan (Tom Cruise), a skeptical reporter interviewing the senator (wasted Meryl Streep), and two of the professor’s students who feel duty-bound to enlist and, of course, find themselves in hell-hole Afghanistan. The title, “lions for lambs,” shortens (and waters down) a Battle of the Somme observation by a German officer about the folly of British soldiers being led to trench-warfare slaughter by unyielding generals, “Nowhere have I seen such Lions led by such Lambs.” In essence, the lions are hopeful American boys and the lamb/donkeys the self-righteous leaders ill-equipped to manage them either militarily or politically.

The fractured, unthrilling narration skips back and forth between smooth senator, war scenes and anguished (Vietnam vet) professor. But the failure to decide just who and what are important at any given time dishonors the underlying message of hypocrisy abundant, good young men wasted and American idealism betrayed. It’s an abnormally annoying outcome in the hands of Redford, whose worst films are usually more accomplished.