Lions and tigers, and numbers 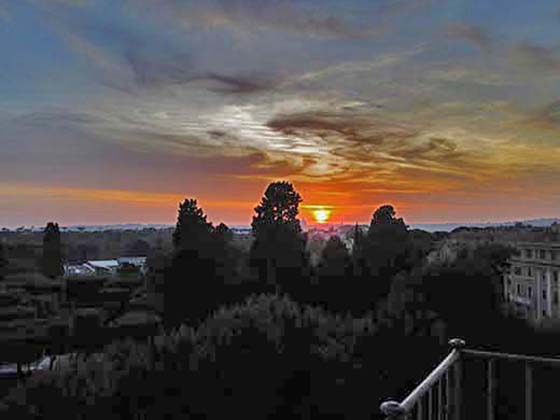 he woman’s voice began early this morning and every few minutes has repeated the same sequence. Numero 77, numero 6, numero 77 – number 77, number 6. Her amplified voice seems to rise up from beyond the trees in the vast gardens that adjoin my home.

Bingo on a Sunday? Why not? Cosmic bingo, announced to all Rome and the world, urbi et orbi. Rome is a city of quarreling wonders competing for the spotlight. So once again: why not?

The explanation satisfied me for a time but lost its whimsy as the woman’s numeric announcements moved from late morning into afternoon. 77. 6. 77. 6. Maybe a numerologist had tailor-made a car alarm — if only car alarms knew such eloquence.

And howling cars are the city’s most ubiquitous auditory punctuation, topped only by apartment alarms on the ear’s Richter scale. Car alarms usually go mute within minutes. Home alarms belong to a more persistent genus. In summer, they bray unattended to until their wailing wheezes into caricature. The police don’t seem to care, at least not where I live. They prefer to let the batteries die.

Rome is a city of quarreling wonders competing for the spotlight.

Sometimes I worry about the sanity of the lions and tigers in the nearby nature park. Fenced in and unable to complain, they can’t shake off the exasperation by devouring a visiting child. It would be nice to imagine a lazy lion and a bored tiger playing Sunday bingo with the lion holding a 77 and the tiger a 6, but that script doesn’t read: Big cats yawn at numbers. As captives, they’ve heard them all before.

But shouldn’t ostensibly enlightened humans be able to do something about a woman fixated on two numbers and determined to repeat them until the cows come home, if cows ever really come home, which the ones in fairy tales never do?

True, some announcements stick around for a lifetime, as in “now boarding” or, before the digital age, “third floor, men’s wear.” The London Tube’s “mind the gap” song still refuses quashing.

As for Rome, it seems sometimes akin to yesteryear’s department store, the one with the elevator man levitating between lingerie and home appliances, gardening tools and lumber, if not stuck between floors. It’s a place where even today only one kind of store sells cigarettes and public placards play a role in national politics.

Musings on menswear aside, it’s now been eight hours since the woman began speaking of 77, or 6, and she’s still at it. As the day passes she grows wistful, if not wan. As if no one’s around to claim her numbers, or that one of them might be her own. But nothing stops the announcing of the accursed combination, and as far as I can tell she’s determined to keep at it until the ciphers make a name for themselves, or pack up and move to Naples.