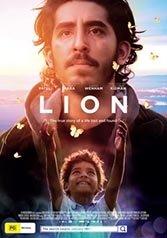 Filling in the get-out-your-hanky feel-good category for the 2017 Best Picture Oscar is “Lion,” a “Slumdog Millionaire”-style film from first-time Australian director Garth Davis, who previously worked in commercials and TV. The story is loosely based on “A Long Way Home,” the autobiography of Saroo Brierley, an Indian-born Australian businessman who was separated from his birth mother at age five.

We watch as Saroo, a youth from a poor but loving family, loses sight of his brother and is suddenly thrust into the vastness that is India. As a boy alone, Saroo (Sunny Pawar) must confront all sorts of terrors, including night stalkers and pedophiles (Pawar is an exceptional choice, with his large eyes, expressive face, and skinny legs). We see the world from Saroo’s vantage point as he hopscotches around a desperate landscape.

Later adopted by a do-gooder white Tasmanian family, whose driving force is the mother (a strong showing from Nicole Kidman), there’s hardly any time for Saroo’s coming of age. Instead, seemingly overnight, he’s a 20-something student at a hotel management school in Melbourne. It is there that he decides to investigate his complex past.

The adult Saroo (Dev Patel) quits his job and spends days and nights with maps and Google Earth insisting he must find his true mother and brother, both lost to the passage of time. In fact, the search is all about Saroo’s identity. Credibility is shoved aside as Saroo stumbles on his hometown — and (predictably) his mother. Applauding villagers close things out (followed by a “where are they now” montage).

Rooney Mata is wasted as Saroo’s adult girlfriend. Bad guys are little more than shadows. This is competent melodrama, but no best picture here.