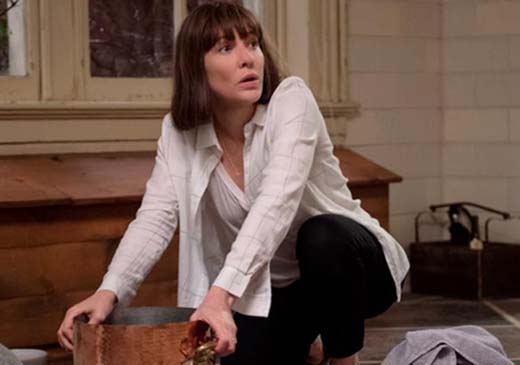 magine this: You’re a little hungry, so you step into a small Italian trattoria for a meal. You have modest expectations until you take your first bite, and discover that the food is extraordinary. You close your eyes for a moment, savor the taste, but when you reopen your eyes, you suddenly notice what looks like a hair in your meal. But wait, it’s not a hair – it’s a cockroach.

That more or less sums up the experience of watching Richard Linklater’s “Where’d You Go, Bernadette,” the story of a nutty, well-off woman on the run from herself.

The film’s first stretch is master-chef material, while the endlessly contrived second half seems like the work of a hyperactive 7-year-old let loose in the cinematic kitchen. Or maybe Linklater, who knows how to make good films (the “Before” trilogy and “Boyhood,”), was approached by a Hollywood hit-man who put a gun to his head and told him to switch into feel-good romantic comedy mode, or else.

The opening hour or so of his latest effort is intellectual and emotional bliss. It’s witty, but not pretentious; serious, but not heavy. It’s perfect for those who prefer laughter to giggling.

At the center of it all is Bernadette (Cate Blanchett), a wildly eccentric genius and former architect – a woman who is stylish, cynical, morbid, and ferociously disappointed with the world around her. In the real world, you’d likely steer clear of her kind. But this is Cate Blanchet, after all, so you’re glued to her every move and beg for more.

Bernadette lives in a creaking Seattle mansion and avoids people at all costs, often using a virtual assistant to get things done. She disdains the helplessly cheerful mothers who populate the neighborhood. All she wants is to be left in peace; we see her hiding behind retro designer sunglasses and sticking to the inside of her vintage Jaguar. 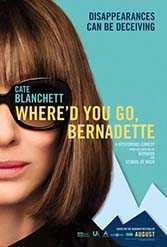 Like watching two movies, one engaging, tje other unbearable….

She’s not completely alone, though. Bernadette has a devoted husband named Elgie (Billy Crudup), a big shot at Microsoft, and a super-smart teenage daughter named Bea (Emma Nelson). Despite her oddities, the family seems to be doing just fine. Not for long, though. Bernadette’s struggles with the world only increase, until even Elgie appears to run out of patience.

Husband and wife have promised to take Bea on a family trip to Antarctica, which Bernadette sees as mission impossible (who in her right mind would get on a cruise ship with other people?). It’s at this point that things get really messy. An FBI agent appears at the door – it turns out that Bernadette’s online trip advisor is not who she claims to be.

It is at this precise juncture that Linklater seems to forget, or set aside his craft. Instead, he lets things drift south, both figuratively and literally.

The story, adapted from Maria Semple’s more nuanced best-selling 2012 novel of the same name, is essentially the story of a brilliant woman who’s become unhinged, mostly undone by the complications that tore apart an otherwise luminous past (she was once a stat on the L.A. architectural design scene). She has secrets aplenty, and they’re revealed gradually.

That said, from the instant she vanishes (you’ll never imagine where she’s run off to), Linklater’s movie delivers little more than an assortment of cheap tricks, created for no other purpose than to provide a happy ending. So, when the FBI comes, do as Bernadette does – flee