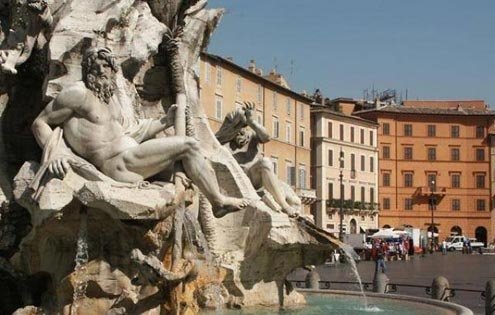 Day-to-day life can dull you to Rome's stunning beauty.
A

t times, I envy tourists. While it’s easy to pick them out from Rome’s natives (Canons dangling from their necks, floppy hats donned, maps fluttering in the breeze, like a flag declaring their foreignness), other, subtler cues also distinguish them. They’re slow and deliberate. For example, they circle St. Peter’s Square, observing from every angle. Their bodies soften when shown the imposing beauty of the Coliseum. Presented with the city’s narrow alleyways or the blue green of the Tiber, they grip their cameras. They sometimes gape. What they possess is the ability to see, to spot beauty in both the magnificent and the mundane.

Now look at me. I have lived and worked here for six months and have come to accept the fact that one of the world’s most famous cities is, in my eyes, “routine.” While I know the Trevi Fountain is a remarkable link between the present and past, an undeniable work of Baroque art, it no longer inspires the same awe as it once did. Months of strolling past it have made it into a fountain, albeit an elaborate and lovely one. The Italian language, once so melodic and mysterious, is now a part of daily living. Italian is not just the language of Dante but also, in updated form, the language of the woman in front of me at the pharmacy describing her post-nasal drip. I use it at my bank and to ask for low-sodium soy sauce at the sushi restaurant below my house.

When friends visit for the first time, I of course escort them to the monuments that have outlived centuries and will certainly outlive me. I try again to see Rome through their eyes. I long to get back their sense of wonder and admiration. I’m not new to the phenomenon of seeing but not seeing. My first album of Bologna, the Italian city I first lived in, consists of illuminated neon paninoteca (sandwich shop) signs as well as five different photos of the ham and cheese sandwich I bought there (pictures like these go on for another album or two and naturally, as the year went on, tapered off all together). When I was younger, I remember how my older brother gradually lost interest in the Christmas holiday and decorating the tree. The same thing eventually happened to me. While Christmas remained a cheerful time, it no longer elicited the same childhood giddiness.

Even now, as I watch my radiologist father scan X-Rays for pneumonia and broken bones, I’m startled by how seemingly routine his job has become, how the stark beauty of the human interior no longer strikes him.

But while certain kinds of excitement may have receded from my Rome experience, there is, strangely, a quiet beauty and comfort in settling in to a new city. Adapting, I’ve developed habits and a routine. I think of my morning coffee and cornetto, comfort food in the form of sweet pale foam and pastry. I think of the hundreds of faces I’ve seen on my daily metro trips and my imagining of their stories. I like the neat simplicity of the dinners I cook for myself, and reading the newspaper on my small balcony. The nightly clang of trashcans being emptied has become a settling sound. I find a strange joy in watching the children I baby-sit pick up English words, asking for “ice cream” or earnestly reciting their colors.

There is a subtle beauty in these habits, in the small part of the world to which I’ve staked a claim. No, it is not as breathtaking as the Coliseum seen for the first time, but beauty is not confined to one musical scale. The tourists will go home and carefully place their photos into albums, Piazza Navona and the Spanish Steps pinned underneath a plastic lamination. They’ll take them out from time to time, and reminisce. They may walk by the mountains of Peru or the Grand Canyon, all the while thinking of Rome.

And as they do, I, million miles away, will be here at my desk, the sun casting shadows across my notebook, writing as I write today.