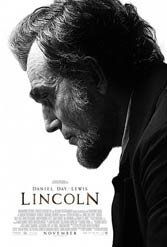 Since straying from his sci-fi/matinee penchant, Steven Speilberg has taken to historical reconstruction, whether world war (“Schindler’s List,” “Saving Private Ryan,” “War Horse”) or the 1974 Olympic massacre (“Munich”), often landing some fine (if overly sentimental) punches. “Lincoln” is no exception. It is a meticulously crafted historical fiction about Abraham Lincoln’s shrewd and sometimes devious effort to ensure the passage of the 13th amendment, which abolished slavery and endures as his greatest legacy. But what makes this superlative instead of good — both as American propaganda and lucid, convincing narrative — is Daniel Day-Lewis’ methodically rich and physically naturally embodiment of Lincoln, along with the acting ensemble positioned in his Civil War-era Washington political orbit. Spielberg, working from Doris Kearns Goodwin’s flattering 2005 book “Team of Rivals: The Political Genius of Abraham Lincoln,” opens in January 1865, the start of Lincoln’s second term. Union forces have the Confederacy on the ropes and it is Lincoln’s wish to ram through a House amendment before the war’s end second-guesses the 1863 Emancipation Proclamation, an executive order created largely to beef up Union forces.

But Spielberg’s magnet is Day-Lewis’ Lincoln, a patient, wisecracking, idealistic but pragmatic man who defines American can-do idealism. Day-Lewis, the acting equivalent of fine red wine, brings to Lincoln a perfectly tuned thoroughness of spirit and compassion. His character is the film’s gift, in that the Lincoln on movie would seem a viable candidate for his age and any other. Everyone chips in nobly, with Jones’s tempestuous Stevens stealing whole chapters (particularly up against Walton Goggins’ fraidy cat Wells Hutchins, who epitomizes impressionable, swing-vote Democrats). Spielberg mostly swats away musical and happy ending schlock. Instead he lets his acting mules shoulder the burden of an uplifting story they control from start to finish.