Lincoln in the Bardot 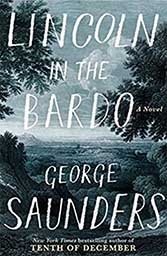 George Saunders is a great American writer. His extraordinary first novel is not his best book. It is, however, his most ambitious in a career that has so far featured stunning and surreal short fiction based on meticulous alterations of every-day life.

The novel’s goal is more sweeping, sometimes to its detriment. It is 1862 and President Abraham Lincoln has lost thousands of soldiers to civil war carnage and now, suddenly, his 10-year-old son Willie to typhoid. Saunders sets up shop in limbo, where three netherworld narrators, ” long-standing and faithful residents,” discuss their histories and the burdens of the afterlife while pining for a return to “that previous place” (‘Bardot” is the Tibetan Buddhist intermediate state between life and rebirth). Enter Willie Lincoln, who unhinges the staid graveyard order by seeming to bring with him the power to communicate with his heartbroken father.

Saunders” industrious research populates the landscape with a howling cast of decaying extras who help reconstruct an era as well as provide a wild and wooly portrayal of the weird space between coffin — “the sick-box,” since the dead resist being seen as such — and the “bone-chilling” next event, known as “the matterlight blooming phenomenon.” Great gobs of light suck souls to the “dreadful diamond palace” where final judgment is cast. Limbo’s shape-shifters mostly busy themselves “being nothing, and doing nothing.” But Little Willie’s transcendent closeness to his father sets the corpses atwitter, with Saunders as their social medium. Could it really be there’s a way back to their former realm?

Innumerable first-person accounts create a candlelight image of Lincoln as father, as scorned or adored president, as a man transformed by grief (“an open book, an opening book.”) Willie’s death pushes the forlorn president to the brink.

But set so many heads a-bobbing and the “vast energy broth” eventually bubbles over. Bickering among the after-lifers fracture the Lincoln story. Yet Saunders, charmed by his own serpents, continues to amass anecdotes — erotic detritus and bitter grudges aplenty — as if there were literary safety in numbers. Little Willie and pensive Lincoln occupy slivers of attention, the acres, then slivers again. Limbo’s talking ghosts, retired printer Hans Vollman, closet homosexual Roger Bevins III, and the Reverend Everley Thomas must fend off insurgency from chatty denizens whose laminations come to clutter the humanity of the primary story — essentially about a man and his dead son, and the impossibility of their actual reunification.

The novel is kin to Flan O’Brien’s “The Third Policeman,” another intrepid journey into the crevices of the afterlife, and also recalls Mexican Juan Rulfo’s “Pedro Páramo,” a trip into a ghost town in which the spirits burst with lifelike animation.

Saunders’ journey is just as noble and complex, if only his jitterbug conductors didn’t so often trip over their own pulpits (Vollman over his gigantic “member,” mangled before he could consummate his marriage).

In the end, Saunders delivers a trailblazing if messy effort that illuminates life and death, history and mystery, and introduces an opera set worth of players eager for “revived human proclivities” but destined to perpetually come up short. Willie’s fate explains why, perhaps once and for all, and it is Vollman who understands it best: “Dead, dead, dead! That word. That terrible word.” And all comes full circle.