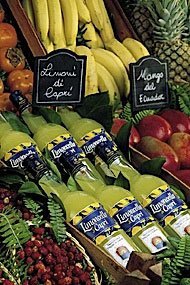 hile it may seem like a permanent fixture to Italian Slow Food dinner tables throughout the world, the lemony shots of Sorrento sunshine we know of as the digestivo Limoncello are a fairly new phenomenon to after-dinner revelry in Italy.

Depending on who you ask, the liqueur’s origins could be Amalfitani, Sorrentini, or even Capresi though experts usually agree that the origins of Limoncello likely date back to the Middle Ages, when monks often used an infusion of alcohol with lemon peels for medicinal purposes or to make flavorful Rosoli. Rosoli are super-alcoholic drinks that until 20-odd years ago had virtually fallen out of favor. These liquors are made by mixing an infusion of herbs, fruits or nuts into base syrup that’s then added to an alcohol extract, allowing the mixture to age. The name comes from Medieval Latin ros solis, or in English, “sun dew,” which for me is just the right name for these heaven-scented drops.

We find even more hints of Limoncello’s early childhood in writings left by nuns of the Santa Rosa convent in Conca dei Marini who, more than 200 years ago began making their renowned “Sfogliatella Santa Rosa.” The secret to this delightful dessert is said to have come from the sisters adding a healthy measure of tasty lemon liqueur to the pastry’s delicate ricotta. Oh lordy, lordy!

But even with the support of religion, it didn’t catch on until 1891 when Limoncello recipes, in varying styles, began showing up in Italian cookbooks. Unfortunately, unless you were living or at least dining in Campania it’s unlikely you would have had the opportunity or pleasure to imbibe the lemony goodness. Early homebrew versions were jugged in any handy glass container and were usually offered to houseguests. Served at room temperature, it hardly resembled that frosty after-dinner shot that we now drink or drizzle over ice cream or on a bowl of fresh fruit.

So how did all those decorative yellow bottles wind up on the shelves of tourist shops and restaurants from Torino to Messina?

The idea of producing the beverage in marketable quantities appears to have been the brainchild of Massimo Canale, who in 1988 filed the first registered trademark Limoncello, based upon a tried-and-true recipe handed down from his bis bisnonna (great-great grandmother) who ran a small boarding house with a large lemon orchard on Capri at the beginning of the 20th century.

Thanks to her memorable recipe and the foresight of her entrepreneur great grand-babe, folks all over the boot and more recently, the world, have the chance to digest their respective lavish plates of pasta with an after dinner treat that tastes like a fresh spring day on the Amalfi coast.

But while I am thrilled, living in Italy, to be able to drink Limoncello at will in most any local bar or restaurant, those sips tend to be passing moments that don’t add up to much in my collective memory. The Limoncellos I best remember and find most gratifying have been the fruits of labor made by someone I know. Part of it is the simplicity of the haphazard bottles (I’ve seen it in everything from honey jars to miniature Coca-Cola bottles), but a more important aspect is the tenderness of knowing the person or persons who peeled all those lemons and stirred all their sentiments into it.

Last Spring, my best friend moved away from Rome, and while we both hope it won’t be forever, making Limoncello side by side in her Prati apartment before she left kept us focused on remembering what had brought us together, a love of all things Italian, and not on her impending departure. I’m sure a few tears found their way into that batch, but there was, and is, something fun and sentimental about toasting my friend with every glass of her famous homemade batch, knowing that the hands of several writers in this publication played a part in its making.

Don’t have time to make it yourself? Then I suggest Limoncello di Capri — a tartly-sweet version made with fruit from the Solagri cooperative, a group of 200 or so farmers using the peel of the “Oval of Sorrento,” a PGI lemon (“protected geographical indication”) harvested using old-world cultivating techniques.