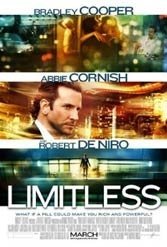 The clever is different from the facile. Cleverness excites, annoys and stimulates; the facile charms but lacks depth and gumption. Director Neil Burger’s film is as facile as they get, disappointing after his deft handling of “The Illusionist.”

“Broke, depressed off my ass” New York writer Eddie Morra (Bradley Cooper) is introduced by chance to a “little clear pill,” the disc-like NZT-48, and suddenly he’s Google on an iCloud, with a “sparkling cocktail” of information buried in decades of unconscious memory at his beck and call. ADD Eddie, when drugged, is “enhanced Eddie” – “I suddenly knew everything about everything.” Anxiety vanishes, girls come easy, and an unwritten novel is completed in a few days. It’s a perfect fantasy conceit for the anti-depressant age: Find the right med and you, too, can be “booted up” into a human digital data bank, a Don Juan of craft and cool who can acquire wealth by advising the amoral and mighty (in this case a high stakes Wall Street player played by Robert de Niro).

But what happens when your supply runs out? Among other things, there’s time warping, black outs, and maybe even murder. Eddie’s Delphic Oracle high-life would seem headed for a fall. Unless…

Burger never really decides if he’s making a fantasy thriller that’s also a backhanded stab at drug dependency or a Prozac Nation satire. The loose ends are too many to count. Only the script’s last 10 minutes provides a jolt, but it’s too little, too late. That smart Eddie is charged with film-long voice-overs doesn’t help. Based on Irishman Alan Glyn’s 2001 novel “The Dark Fields.”