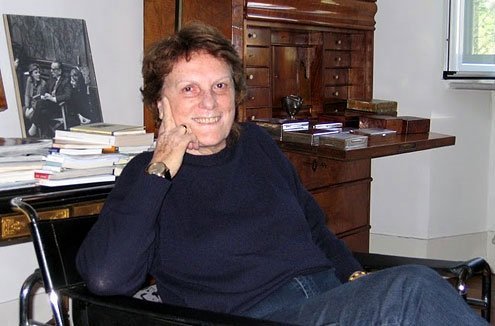 Cavani at home in Trastevere. Photo by Katie McGovern.

Italian director Liliana Cavani came of age at a time of when neorealism overlapped with Spaghetti Westerns. She’s among a handful of Italian directors to have made movies with Hollywood talent. Her most recent English-language film, the 2002 detective thriller “Ripley’s Game,” starred John Malkovich and was widely hailed as a thoughtful, meticulous take on ground covered more popularly by John Minghella’s big-budget “The Talented Mr. Ripley.”

After earning a degree in ancient language studies at the University of Bologna, Cavani traveled south to attend Rome’s renowned “Centro Sperimentale di Cinematografia,” inaugurated by Benito Mussolini prior to World War II. She studied documentary filmmaking and probed movies made about the rise of the Third Reich, the ascent of Stalin, and the role of women in the Italian Resistance.

Cavani’s northern Italian roots — she was born in Carpi, near Mantua — and Italy’s post-war hardships distanced her from the more traditional Italian approach to gender models. “The boom of the 1950s arose from the fact that the women also worked,” she says. “[Women] could buy apartments and send their children to school, and their children went from being blue-collar laborers to white-collar professionals.”

Her wartime-era upbringing also made her more sensitive to the wave of political and egalitarian activism that would follow the 1950s economic boom, including the feminist movement of the 1960s and 70s. “I had both Fascist and anti-Fascist relatives,” she says. “My father was an architect interested in urban development. He took me to museums. He had worked in urban planning in Baghdad in 1956, when Iraq was still under British control. My mother was very strong, very capable, and very sweet.”

In the mid-1960s, Cavani made a number of war-themed documentaries, including one about Phillipe Pétain, who led Vichy France, the state-within-a-state that collaborated with Nazi Germany. She then directed film biographies of St. Francis of Assisi and Galileo, in each case emphasizing their rebellious natures. Her 1971 movie “L’Ospite” furthered her interest in social and psychological themes, focusing on the relationship between a writer and a former mental asylum patient.

Cavani’s film immediately divided cultures. American critic Roger Ebert called it “despicable,” and both major New York critics, Pauline Kael of The New Yorker and Vincent Canby of The New York Times, dismissed it as “junk.” But in Europe, the film was uniformly hailed as a groundbreaking attempt to probe the unsettling sexual and psychological ambiguities generated by war and the exploitation of power following war.

Cavani never again fueled international debate, but she did continue making TV and feature films. Her 1989 “Francesco” cast Mickey Rourke as St. Francis and gave Helena Bonham-Carter an early role. Rourke recently called Cavani “one of the best directors I ever worked with.”

Cavani, who speaks with a gentle north Italian lilt, lives in a Trastevere apartment with hardwood floors and frescoed ceilings. Its rooms are filled with artwork and sculptures. She spoke to Katie McGovern. These are excerpts from their conversation.

How difficult was it for a woman to make a career as an artist in Italy in the 1960s?

It was very hard to be an artist then, harder than it is now. There was no basis from which to help people just starting out. It was hard to become an assistant director or even an assistant. I was lucky enough to win a RAI [Italian state TV] competition that opened the door. I started out with documentaries.

Has the role of women in Italian show business changed since you started your career?

When you started out, Fellini, Antonioni, Visconti, De Sica and others were still working actively. Did you feel as though you were in the presence of “masters,” or was it just like being among colleagues?

My colleagues were (Marco) Bellocchio, (Bernardo) Bertolucci, and (Pierpaolo) Pasolini. We were different than those directors you mention, who did either neorealism or Italian comedy of manners. We were interested in another kind of cinema, which addressed problems of our time. We were more interested in the psychology of politics.

Is there a European director, Italian or otherwise, whose influence you felt when starting out as a filmmaker?

The generation of Bergman, Bresson, and Dreyer influenced me. They were a lot older than us. I saw their films in a movie club I started with friends in Bologna while I was at university, since these movies weren’t shown in theaters. We would go to an agency in Bologna and pick out the films that we hadn’t seen.

You’ve worked with John Malkovich and Mickey Rourke. What’s the difference for a director between approaching an Italian and an English-language movie?

Fundamentally, making a movie is the same. But in Italy you have a lot more freedom with the script. In English, the movie script may go through many more revisions. When I made “Ripley’s Game,” we realized there were certain things about the script that weren’t working, so the screenwriter would rewrite those parts at night.

Here in Europe, if I see that things aren’t working, I can rewrite them myself or tell the actors the changes when they come on set. We can try different things. Or I can decide to add scenes. It’s less rigid. When I was working on “The Night Porter” in France, [Dirk Bogarde] knew to expect changes and would come up to me in the morning asking, “So, what have you got for me today?”

What movie are you most proud of and why?

Probably “Galileo.” I made it in 1968 but the subject is still very current today. At the time, the Italian politician Giulio Andreotti banned the film. Now it’s on TV because it’s part of Mediaset’s library of movies.

Your next project covers violence against women. What are you trying to tell audiences?

Every day women are beaten, often by their own husbands. I visited some violence treatment centers.

A law in Italy no longer allows stalking. Though women should report this violence, often they don’t because the people who are hurting them are their husbands, the fathers of their children, or even their fathers. Which means that men’s education has remained stuck at a time when women were considered objects, like farm animals.

I read the Ten Commandments and the Ninth one says “You shall not covet your neighbor’s wife,” but there isn’t another one that says, “you shall not covet your neighbor’s husband.” So the Ten Commandments refer to men, not to women. So women are not human. They’re like objects. So once you have yours, you shouldn’t want that of the others. This idea disturbs me.

Violence against woman, stalking or otherwise, is an expression of this idea – that once you’re married the woman becomes yours.

In today’s fashion, style calls for half-naked women. They’re objectified. That would be fine if men were also held to the same standard. But they’re not. If you to take a look at the Italian politicians entering the parliament building, the men wear comfortable loafers and suits, and the women instead are in their high heels and low-cut tops. Fashion doesn’t love women; it just aims to sell them.

Has the power of the Catholic Church changed over the decades, in terms of its influence on Italian morality?

The Church worked as a block. It barred women from using the pill, for example. But I think its influence has diminished over time. I don’t see too many women following these ideas today.

You’re from the north. Do you still sense a north-south division in Italy? Has it narrowed over the years?

The north and south have a hard time getting culturally closer. In the 1950s, for example, someone from northern Italy had more in common with a German than with an Italian from Calabria.

There’s been a slow change, but unfortunately slow is the word. In 1965, I made a four-hour documentary on domestic immigration south-to-north. These immigrants eventually became more northern than the northerners.

What about the underworld factor?

The real problem in the south was and remains the Mafia. The famous Cassa per il Mezzogiorno financing was intended to help southern agriculture become more technological and to assist small businesses. But much of the money ended up in the hands of the Mafia. [Editor’s note: The so-called Southern Development Fund was state-financed fund set up to promote southern economic and industrial growth between 1950 and 1984. In all, an estimated €140 billion, calculated in lire, were spent.].

While economic stimulus helped the north, it had little effect on the south. The southern regions of Puglia and Basilicata have made strides, but Calabria and Sicily are still in trouble.

What’s your view of Italy now?

Italy is made up of all kinds of separate realities. That shouldn’t be surprising, since from the days of the Roman Empire until unification in 1871, Italy was represented by separate states.

I admire my country. I admire the Roman Empire that created aqueducts instead of open sewers. But the present-day seems to me a disaster. Same as during the Fascist period, when Italy was also a disaster.

What is your hope for Italy, politically, 20 years from now?

That it becomes a normal European country. Clearer and more mature.

If you could work with any actor on any project, what would it be?

I wouldn’t be able to think of what actor to work with if I didn’t have a clear project first.

You live in Trastevere, the heart of old Rome. What drew you to there?

I feel like I live in a small ancient town, with its shops, churches, and artisans. It is the heart of Rome, but there are fewer tourists here than at Piazza Navona.

How has technology — email, digital film, the Internet — changed your work?

It hasn’t, except for the fact that now it is easier to write and send scripts. I just got one from Los Angeles.

As you get older, do you find that your closest friends are in film or outside of this environment?

Both. I envy those who still have their friends from high school and university. I left the north and so only have the friends that I found here.

Did you ever consider living somewhere besides Rome? In fact, why did you stay?

I would have liked to have lived in New York. I should have gone there when I was 30. But maybe I would have needed someone I loved to take me there.