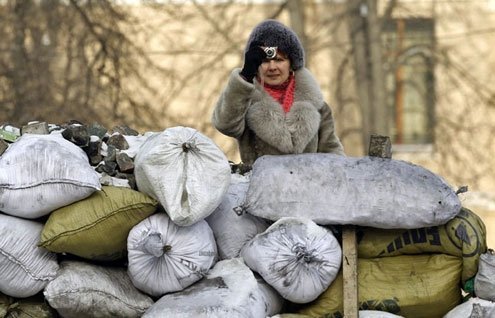 he abiding back-and-forth over Ukraine is helping to flesh out how global crisis is viewed, absorbed and transmitted in a post-Sept. 11, 21st-century West increasingly formed by and subservient to the language, tone and texture of instant communication and participatory “journalism.”

Ambiguity is superfluous: To satisfy public yearning for involvement in international polemics, often complex events have been surrendered to the ballistic needs of breaking news. Right and wrong are identified straight up and then conveyed unequivocally by both cable networks and online messengers, who reinforce the original message at the expense of the subtle. Mistaken assessments can later be corrected, or if need be apologized for.

Working premises are self-indulgent. In tyrannies, street demonstrators are imbued with hopeful idealism and informed fervor, both of which suit Western cultural legacies. That some demonstrators might not know the meaning of the common good is set aside to nourish the simpler polemics of direct confrontation and, ideally, “revolution,” an intoxicating word in affluent, so-called postmodern times.

In Cairo, Tahrir Square protestors were oversimplified into huddled yearning masses in need of amiable cheerleading. In Kiev, crowds were billed as easy-to-like progressives trying to reason with a cruel pro-Russian president. That the masses included Islamists in Cairo and Fascists in Kiev (and rogues and revelers in both) was a back-story mostly kept out of the mainstream picture to avoid marring fairy tale nobility.

“Legitimacy” has lost meaning: Just as the word “unprecedented” is casually assigned to the before and after of major elections or devastating storms, “legitimacy” is similarly added to or subtracted to make governments more or less likeable. “Legitimate” distracts from right-wrong messiness while “unprecedented” is little more than a working synonym for “important.”

In Egypt, protestors were “legitimate” because they sought to oust an oppressive, autocratic president who wrongfully and violently resisted the will of his brave citizen, later portrayed as underdogs redeemed. In Ukraine, though not a dictatorship, the (elected) president was discredited based on the size and passion of opposition against him and his own eventual recourse lethal force. When he fled, the incipient government was awarded legitimacy because it emerged from a “good” protest — and was welcomed by Western leaders. As a bonus, Russia illegally entered Crimea, adding to the black-and-white story line.

Since then, the U.S. State Department and the Russian foreign ministry have been fighting a partisan word war, the former insisting the incumbent president lacked legitimacy because his own party disowned him after he fled, the latter saying he was an elected incumbent who by any and all objective measure was forced from office in a coup masquerading as a protest.

Complicating things, legitimacy as related to rule of law was mangled by the so-called War on Terror, which included the U.S. invasion of Iraq and the 2011 sovereignty-violating raid that led to the death of Osama Bin Laden. The word now serves at the imprecise convenience of its speaker.

Crisis as message and massage: With cable news and the Internet tirelessly working to win and hold public attention, crises serve as unscripted reality-cum-variety shows. Their severity — always emphasized — is both their star and the cheap thrill source of their staying power, depending also on viewer identification with country and its sensibilities. Crises receive their own array of hosts, commentators, and experts much like a major sporting event. News lovers and social media followers are encouraged to interact with a crisis, thus satisfying the growing need to engage in verbal sparring with friends or more combative public ranting, often anonymous. “Power to the People,” a 1960s radical slogan, has been superseded if not mooted by the noise of the people, now primetime and often guttural.

Cable media supports crisis rapture and subverts context by using and reusing compelling images to sustain a sense of endless immediacy and nagging woe. Viral videos have a similar effect. Seeing street warfare or disaster on a loop generates an intoxicating helplessness that eventually makes viewers eager to “do something, ” or pitch in their passion, an inchoate feeling that seeps into government responses as well.

The white hat-black hat worldview christened by the postwar slogan “never again” is then turned against villainy and appeasement, yet another corrupted word. Passion also helps satisfy the public anxiety quotient (and its sweet-tooth for hysteria), since modern audiences have a masochistic relationship with bad news, despising insecurity and threats while also fascinated by the terrible and arrogant people advertised as making those threats, who in turn become bad-guy celebrities.

In a vicious circle, these factors are eerily similar to a powerful weather system as photographed from space, its spinning menace seen as a blurry onslaught that, in a madly ironic twist, demands passion to reason with it.